The Recession Is Over?!? Now What?

In the December 2008, the National Bureau of Economic Research (NBER) made the official proclamation that the U. S. entered an economic recession in December 2007. As is sometimes the case, U.S. hoteliers began to feel the pain well before most other businesses.

According to Smith Travel Research (STR), the U.S. lodging industry first began to show signs of weakness in July 2006, when year-over-year demand levels contracted by 1.4 percent. The following months were volatile – some good – some bad. Total demand declined 1.8 percent in 2008, and STR reported an 7.0 percent decline through September 2009. The December 2009 edition of PKF Hospitality Research (PKF-HR) Hotel Horizons® forecast report calls for a total year decline in demand in 2009 of 6.3 percent.

The U.S. Gross Domestic Product grew 3.5 percent in 3Q09, bringing close to a recession that lasted for approximately eight (8) quarters, twice as long as the 2001 recession and longer still than the 1990 episode, which lasted for three (3) quarters. Based on Moody's Economy.com outlook, PKF-HR forecast that the nine consecutive quarters of declining demand for U.S. hotels that began in Q1 2008 will come to an end in the second quarter of 2010. Given this expectation, what will be the shape of the recovery that follows? Will we see a mirror image of what occurred after the previous two domestic recessions, or will the road ahead take the industry through new territory?

Economic reason suggests that, as the level of productivity (output) contracts, so does the demand for most goods and services. This is certainly true in the lodging industry. Typically, less demand leads to reduced construction of additional supply, as was the case during the two most recent U.S. recessions occurring prior to the current episode. For the 1990 and 2001 downturns, diminished levels of supply growth became readily apparent immediately upon the onset of these recessions. Importantly, these lower levels of activity persisted three years past the beginning of the economic recession. 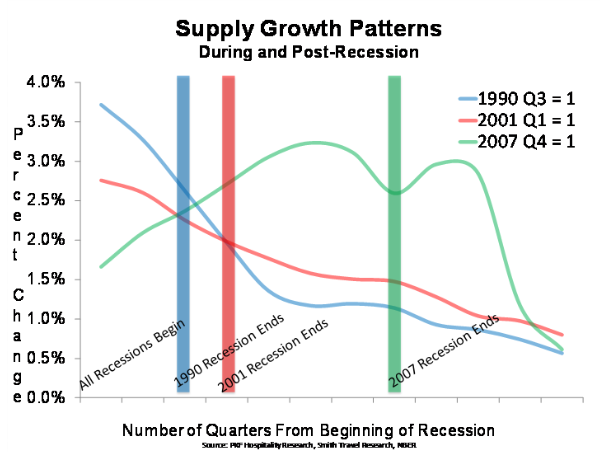 Analysis of the data relating to the current 2007 recession reveals a distinctly different experience. Supply growth in Q4 2007 was approximately 1.7 percent, slightly below the long-run average level of 1.9 percent according to STR. Contrary to the previous downturns, room capacity then expanded in 7 of the 8 quarters immediately following. Our current forecast calls for above-average supply growth into Q1 2010, the tenth month following the start of this recession.

Economic declines invariably lead to lower levels of lodging demand growth and, in the case of the 2001 and 2007 recessions, actual reductions in the total volume of rooms sold. While the rate of demand growth began to dissipate immediately upon the start of the 1990 recession, the downturn was relatively mild, and demand levels did not actually contract until one year after the recession began. Conversely, demand declines were realized almost immediately when the 2001 and 2007 recessions began. The depth and length of these two contractions was much more severe than the 1990 event. The former can be attributed to the events of September 11, 2001 and the subsequent stigma associated with travel away from home. In the case of the 2007 recession, the simultaneous occurrence of a stock market crash, the bursting of the housing bubble and the erosion of credit availability resulted in a severe economic downturn, and significantly reduced levels of lodging demand occurred as a result. 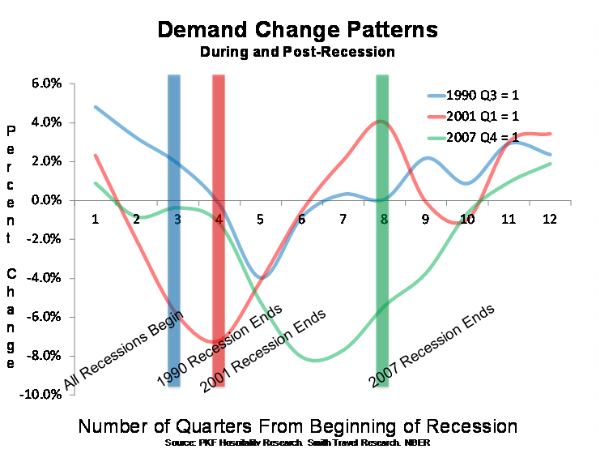 The cumulative loss of demand throughout the current recession is forecast to be significantly worse than that which occurred in the early 1990's and at the beginning of this decade. The severity of the disconnect between the property cycle (supply increasing) and the business cycle (demand contracting) this time around is nearly ten-times as large as what was experienced in 1990-93 and twice as large as that realized in 2001-2004.

The Loss of Pricing Power

Not surprisingly, ADR growth began to dissipate at the onset of each of the past two recessions. However, because market conditions were so strong immediately prior to the beginning of the current recession, U.S. hotels actually enjoyed some degree of nominal rate increases for a full year after the recession started. These growth rates lasted roughly two-to-three times longer than what was realized in 1990/91 and 2001.

The December edition of PKF-HR's Hotel Horizons® calls for ADR's to realize their first year-over-year increase in Q4 2010, representing the end of eight consecutive quarters of decline that began in Q4 2008. Not surprisingly, considering the aforementioned unprecedented disconnect in current supply and demand fundamentals, the declines in pricing power that have been, and will likely continue to be, achieved in the market, have created an unattractive new reality for most industry participants.

Is There Any Good News?

Yes. History tells us that extraordinary declines lead to above-average recoveries, and such will be the case with the current episode. After the past two recessions, demand grew a cumulative 12.5 percent during the three year period commencing the quarter after which the recession ended. The December 2009 Hotel Horizons® calls for demand to grow more than twice that amount as the industry recovers from the current recession. With this growth will come the eventual absorption of the new rooms that have been overwhelming many markets of late. Above-average increases in room rates, commencing in the second half of 2011, will follow.

This article was written by R. Mark Woodworth, the President of PKF Hospitality Research (www.pkfc.com). Parts of this article were published in the November 2009 edition of Cornell Hospitality Quarterly and January 2010 edition of Lodging.