A Trip Through Brooklyn's Hotel Bossert

The Hotel Bossert was built in 1909 by Louis Bossert, a Brooklyn lumber magnate, as a residential hotel in Brooklyn Heights. The historic 14-story, 224-room hotel, once referred to as the “Waldorf-Astoria of Brooklyn,” has been owned by the Jehovah’s Witnesses since 1984.

The Brooklyn Dodgers celebrated their first and last World Series championship when they beat the New York Yankees in 1955. In the lobby of the Hotel Bossert, delirious Dodger fans celebrated by singing “For He’s A Jolly Good Fellow” for Walter Alston, the Dodgers manager. 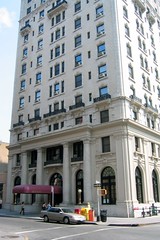 The Bossert was once famous for its Marine Roof, a two-level rooftop restaurant and nightclub with a nautical motif and magnificent views of Manhattan. In the summer of 1933, Freddy Martin and his orchestra were playing for dancing at the Marine Roof. They were so well received that the following summer, Freddy Martin and orchestra were playing at the St. Regis Roof of the St. Regis Hotel in Manhattan.

At the end of 2009, the famous classical music station WQXR became a non-commercial, listener-supported station on 105.9 FM. Believe it or not, the station was first conceived by advertising executive Elliot Sanger and radio technician John Hogan over dinner at the Bossert in 1935.

The Bossert was one of several hotels that the Jehovah’s Witnesses acquired and renovated during the 70s and 80s. By 1984, when the Witnesses purchased it, the building had been reduced to a sad condition by age and neglect. The Witnesses performed an excellent restoration, reproducing the mahogany windows and replacing 2,500 square feet of Bottachino Classico marble with stone from the original Italian quarry. The restoration earned a “Preservation Award” from the New York Landmarks Conservancy in 1991 and a Special Award for Architectural Excellence from the Brooklyn Heights Association in 1993. Now it appears that the Watchtower Society has put the Bossert on the market, where it is expected to bring a $100 million bid.

Visit www.greatamericanhoteliers.com to order the book.