Did you read about the sale of the former Knickerbocker Hotel on 42nd Street to Ashkenazy and partners for $180.5 million?

This historic building opened as the Knickerbocker Hotel in 1906. Developers J.E. and A.L. Pennock originally financed the building in 1903 and retained architects Bruce Price and Marvin & Davis. Only one year later, John Jacob Astor IV, who owned the land, took over the troubled project. The interiors were redesigned by architects Trowbridge & Livingston and a three-story restaurant and bar was added with seating for 2,000 diners. The hotel opened with 556 rooms and a 30-foot-long painting by Maxfield Parrish entitled “Old King Cole” which now hangs in the St. Regis Hotel. 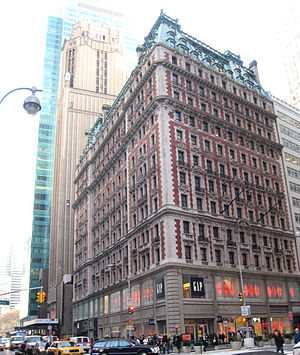 The Hotel Knickerbocker, the newest Times Square hotel, opened its doors yesterday to invited guests… Between the hours of 1 and 6 o’clock the fifteen-story structure on the southeast corner of Forty-second Street and Broadway was thronged with visitors, most of whom were received by James R. Regan, the manager, who has been connected recently with the Woodmansten Inn.… In the main dining room…which is elaborately furnished and decorated after French designs, the most notable features being the tapestries and the beamed ceiling, which is modeled after that in the Chateau de Fontainebleau…. While the Knickerbocker has not exactly furnished itself with a motto, the manager and his assistants will tell you that they are running ‘a Fifth Avenue Hotel at Broadway prices’.… The new hotel can accommodate about 1000 guests. There are 556 sleeping rooms and 400 baths.… Rooms for one, with bath, average about $3.25 a day. The lobby, on the Forty-second Street side, was much admired by the host of visitors, and all paused to take a look at the representation of Father Knickerbocker in the entrance hall. Maxfield Parrish’s “Old King Cole and His Fiddlers Three”, the chief decoration of the barroom, attracted much attention…. Down below are the grillroom, with its own bar; the barber’s and manicure parlors, and the kitchen. Alexandre Gastaud who used to be chef at the Hotel Carlton in London, presides over the kitchen. He is proud of the fact that nothing can go wrong from his department, because of the duplicate service which has been installed. (Gastaud was later appointed director of the kitchens at the new Waldorf-Astoria by Lucius Boomer in 1931).

The world-famous tenor Enrico Caruso and his family lived in the hotel (until his death in 1921) in order to be near the Metropolitan Opera House, which was located just three blocks away. Caruso’s wife gave birth to their daughter, Gloria, in their suite. Caruso is said to have examined her mouth and declared, “Ah, she has the vocal cords, just like her daddy!”  According to a contemporary newspaper story, Caruso ate virtually all his meals in the hotel restaurant, always using the same utensils. It was reported that when he encountered an unemployed man lined up at the bread line behind the hotel, Caruso gave him his coat and shoes. On Armistice Day, November 9, 1918, Caruso appeared at the window of his suite and led the crowd outside in the singing of “The Star-Spangled Banner” and followed it with the French and Italian national anthems.

After the death of John Jacob Astor IV on the Titanic in 1912, his son Vincent Astor managed the Knickerbocker until 1921, the beginning of Prohibition. Astor later converted the hotel into an office building.

One of the legends about the original Knickerbocker Hotel comes from the drink called the martini, which was said to have been invented by the house bartender, Martini di Arma di Tagga. In 1912, he mixed dry vermouth and gin together and the mixture gained the favor of John D. Rockefeller, who liked it so much that he recommended it to all his Wall Street buddies, and the drink quickly became a national favorite. Another remnant of the past is a sign for the hotel that can be found in the New York City subway. The “Knickerbocker” sign is posted over a doorway that once connected the hotel to the east end of the platform for Track 1 of the 42nd Street Shuttle.

During the Depression, the architect Charles Platt designed a million-dollar renovation converting the hotel into an office building. It was known as the Newsweek Building from 1940 to 1959 when the magazine made its home there. The building was listed on the National Register of Historic Places on April 11, 1980. In that same year, the building was converted to residential units called “1466 Broadway,” but was mostly occupied by showrooms and studios for the garment district. By this time, the interiors were sacrificed to the vicissitudes of contemporary fashion and, after the lobby’s barrel-vaulted ceiling was covered with illuminated plastic, the interior became ordinary and forgettable. In order to protect the exterior from destruction, the New York City Landmarks Preservation Commission designated the Knickerbocker Hotel a landmark in 1988.

In 2006, Istithmar, the royal family of Dubai, acquired the Knickerbocker with the stated purpose of restoring it to its former glory as an elegant hotel. However, the global recession forced Istithmar to surrender the property to its lender in March 2010.

The buyers of the 300,000-square-foot ten-story Beaux-Arts building are Ashkenazy, Crown Acquisitions and Highgate Holdings. The price they paid is just 48 percent of the $376 million that Istithmar paid in 2006. The plan is to turn it into an upscale boutique hotel and retail complex.

The Knickerbocker is a Beaux-Arts red brick building with terra-cotta detail and a prominent mansard roof. It recently emerged from netting, scaffolding and billboards to show its restored vibrant façade. Tim Tomkins, president of the Times Square Business Improvement District said, “We watched the release of the Knickerbocker from her commercial corset with a mixture of excitement and anticipation. And we are thrilled that she has now bared her beauty for all the world to see.”

Visit www.greatamericanhoteliers.com to order the book at a reduced price.