In 1965, the Sheraton Corporation of America, under the leadership of President Ernest Henderson, created a brilliant advertising campaign: "Keyed-up Executives Unwind at Sheraton". It was broadly promoted all over the U.S. in print media, TV advertising and locally by individual Sheraton Hotels.

Among my collection of Sheraton artifacts is a translucent plexiglass paperweight (2 ¾" x 2 ¾" x 1") which has a small figure of a businessman with a wind-up key in his back which says "Keyed-Up Executives Unwind at Sheraton". 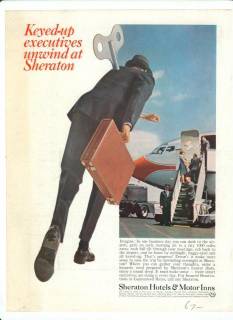 His picture was everywhere: on television, on posters, in airports and railroad stations, on leaflets, matchbooks, cocktail stirrers, in newspaper ads.  He was an inspired creation of Madison Avenue ̶   a fictional character with whom millions could subconsciously identify.  Young and clean-cut, he carried an attached case, glanced at his watch and looked like a businessman scurrying to his next appointment.  He had, however, an enormous protuberance on his back.  For sticking out from between his shoulder blades was a great, butterfly-shaped key of the type used to wind up mechanical toys.  The text that accompanied his picture urged keyed-up executives to "unwind" and slow down at Sheraton hotels.  This wound-up man-on-the-go was, and apparently still is, a potent symbol of millions who feel just as driven and harried as if they, too, had a huge key in their back.

The campaign was eye-catching, clever, humorous and effective.  It continued as Sheraton's brand identification until 1968 when the International Telegraph & Telephone acquired Sheraton.  Soon thereafter, I was hired by IT&T and became the worldwide Product Line Manager for Hotel & Motel Operations to help oversee the management and expansion of Sheraton.

Now, some forty-eight years later, Four Points by Sheraton has embarked on a similar promotional campaign. Brian McGuinness, Starwood's senior vice president, says, "Business travelers have a real need to connect on the road  ̶  both virtually and in person.  Our survey results reveal that road warriors are social, preferring to network or to relax in the company of colleagues rather than just enjoying solitary pursuits".