Did you ever wonder about the hyphen between Waldorf and Astoria (Waldorf-Astoria). Here's how it came to be. On March 14, 1893, William Waldorf Astor opened the world's most luxurious hotel on 33rd Street and Fifth Avenue, the current site of the Empire State Building. Despite poor weather, a kitchen workers' walkout and a serious accident, the hotel opened under the sponsorship of the St. Mary's Free Hospital for Children. George Boldt, the hotel's proprietor along with thirty-seven year old Oscar Tschirky (destined to become Oscar of the Waldorf) greeted each guest at the door. The hotel was designed by the noted architect Henry J. Hardenbergh who later designed the Plaza Hotel (New York), the Willard Hotel (Washington) and the Copley Plaza Hotel (Boston). 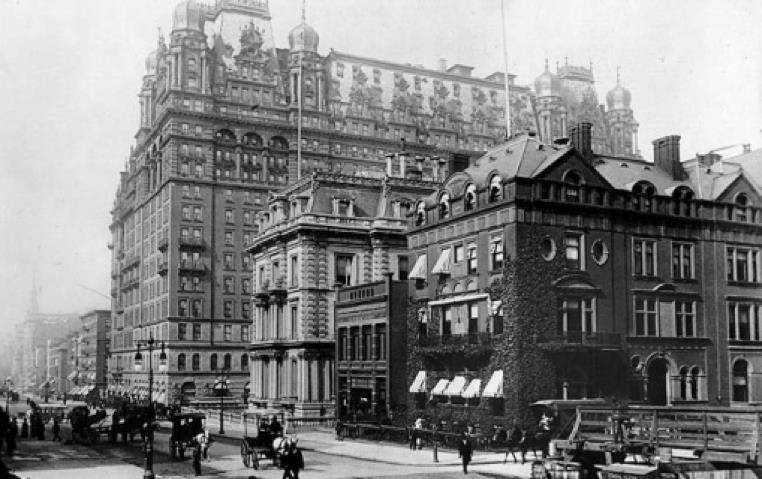 William Waldorf Astor had decided to demolish his great mansion at the corner of Fifth Avenue and Thirty-third street only twenty years after it was built by his father. New hotels were being built on and near Fifth Avenue: the Holland House, Brunswick, Windsor, Buckingham, Grand Union, Park Avenue and the Fifth Avenue Hotel.

The new thirteen-story Waldorf Hotel opened with 450 guestrooms and 350 bathrooms, each of these with an outside window. No New York hotel had ever opened with such pomp and circumstance. The New York Sun wrote about the Waldorf:

To American enterprise is due most of the movement abroad in the world today toward luxurious hotels.... In few palaces of the Old World can such costly and artistic surroundings be found. Those who came found private suites, dining-rooms, salons and bedrooms such as kings could not excel... There were more wonders than could be seen in a single evening- magnificent tapestries, paintings, frescoes, wood-carvings, marble and onyx mosaics, quaint and rich pieces of furniture, rare and costly tableware... one sees throughout the hotel a mingling of foreign and American improvements... Its café is the rival of Delmonico and Sherry.

George Boldt was the great leader of this wonderful new hotel. Perfection- the perfection of hotel keeping- was his religion. Boldt introduced many innovations at the Waldorf: "room service" that enabled guests to have breakfast in bed; relaxed the rule that prohibited men from smoking in the presence of women, installed an orchestra in the hotel lobby and hired Turkish waiters to serve coffee.

In 1895, John Jacob Astor IV (a cousin of William Waldorf Astor) demolished his mother's brownstone mansion on the corner of 34th Street and Fifth Avenue adjacent to the Waldorf Hotel. He built the Astoria hotel and struck a deal with his cousin William Waldorf and George Boldt to manage both hotels jointly.

The new structure was seventeen stories with "perpendicular railways" (elevators) and an indoor driveway on the thirty-fourth street side, a grand ballroom seating 1500 and a roof garden. Between them the two hotels had 1000 rooms, three floors of banquet and meeting rooms and common management. After it was named Waldorf-Astoria, New Yorkers would tell their friends, "Meet me at the Hyphen." 'Where's that?', the friends would ask. 'Between the Waldorf and the Astoria.' As a nickname for the hotel "the Hyphen" did not stick but the hybrid name Waldorf-Astoria did and could be a most valuable intangible asset for exploitation in the Waldorf-Astoria collection. For the next twenty years, the Waldorf-Astoria was operated as a single hotel until George Boldt died in 1916 and the hotel was acquired in 1918 by Lucius Boomer and Senator T. Coleman duPont. Boomer was a hotelier who had been trained in Henry Flagler's Florida hotels and earned his reputation in New York's McAlpin Hotel in Herald Square just one block west of the Waldorf-Astoria. The value of property in the area had grown enormously in the thirty years since the Waldorf opened. New hotels like the Plaza, Savoy,

Netherland, Pierre and St. Regis reflected the inexorable uptown movement to the fifties and sixties.

A famous attraction was a long corridor that ran through the Waldorf connecting the two hotel buildings. It was a sparkling hallway with soaring Corinthian columns, mosaic floors, and upholstered benches along the sides. Almost from the opening, the corridor was a popular promenade for ladies of fashion to display their gowns, jewels and gaudiest plumage. The society of the New York Tribune called it "Peacock Alley". It was reported that it was not unusual for twenty five thousand people to stroll the length of Peacock Alley on a single day.

The original hotel's reign lasted until 1929, when after four decades of hosting distinguished visitors and society balls, the Waldorf-Astoria was demolished to make way for The Empire State Building. But the Waldorf-Astoria tradition did not end then. Two years later, in 1931, a new Waldorf-Astoria opened at Park Avenue between 49th and 50th Streets under Lucius Boomer's direction and Schultze & Weaver's design. The Art Deco style hotel, under scaffolding for months, dazzled thousands of onlookers when it was unveiled. With 42 stories and 2,200 rooms, the building was the largest hotel in the world at the time of its opening.