There a lot of "double-edged sword" issues on the minds of hotel operators these days. Hotel occupancy levels are at record levels, but that is attracting the attention of developers and therefore the threat of new competition.

Inflation and interest rates have been low for an extended period, so it is natural to assume that both will eventually start to trend upward. While revenues and profits continue to grow, so do expenses.

Another headline capturing the attention of hotel managers that cuts both ways is the recent uptick in compensation levels. On the one hand, increasing levels of income has a positive impact on lodging demand. On the other hand, when salaries, wages and benefits are on the rise it has a negative impact on the profitability of hotels. 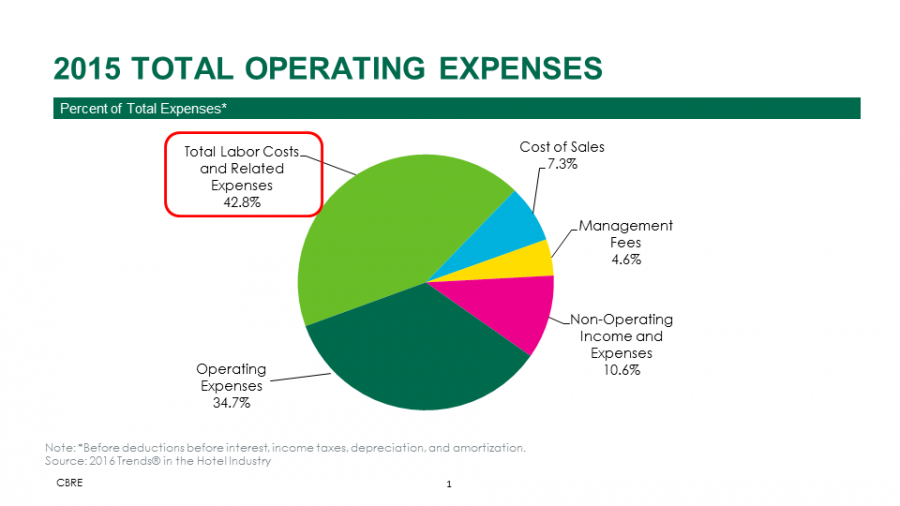 According to the 2016 edition of Trends in the Hotel Industry, the combined costs of salaries, wages, service charges, contract labor, bonuses, and payroll-related expenses averaged 42.8 percent of total operating expenses at U.S. hotels during 2015. Across all property types, total labor costs are the largest single hotel operating expense. Therefore, when the Salaries and Wages component of the Employment Cost Index starts to rise at a real pace of 2.0 to 2.5 percent for all U.S. civilian workers, hoteliers pay attention.

In the hotel industry, we have observed a significant increase in the pace of labor cost growth this past year. On a nominal basis, labor costs grew by 3.7 percent in 2014, followed by 4.6 percent in 2015. Given the low inflation environment, this equates to real changes of 2.0 and 4.5 percent respectively. The 4.5 percent real growth in labor costs during 2015 is the third largest annual increase for U.S. hotels since 1980.

In the following paragraphs, we analyze the factors that are driving the recent increases in labor costs, and how hotel managers are attempting to control this major expense. 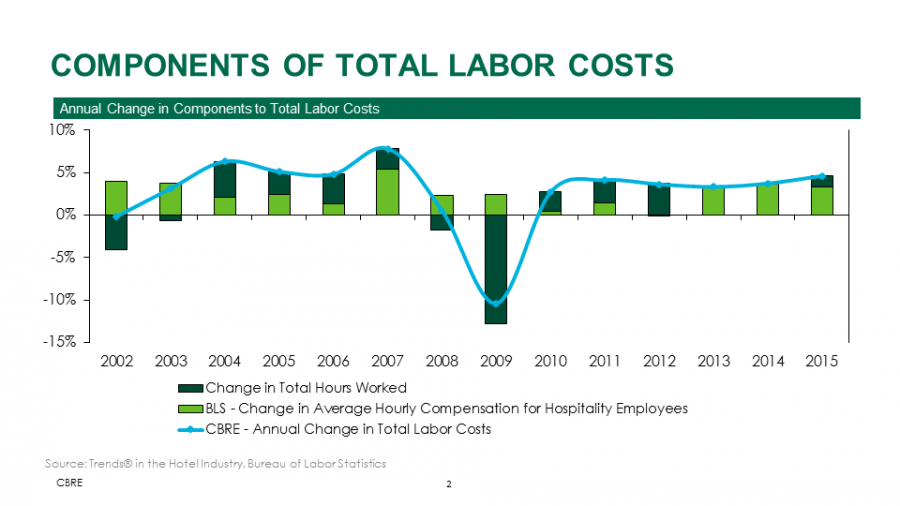 During the initial years of the recovery from the depths of the 2009 recession, it was increases in the number of hours worked at hotels that drove the rise in labor costs.  From 2010 through 2012, 85 percent of the rise in labor costs was influenced by the change in hours worked.  This is to be expected given the increase in occupied rooms that drove the initial stages of the recovery.  Since 2013, the story has changed.  From 2013 through 2015, 89 percent of the growth in hotel labor costs can be explained by increases in average hourly compensation.

Compensation on the Rise 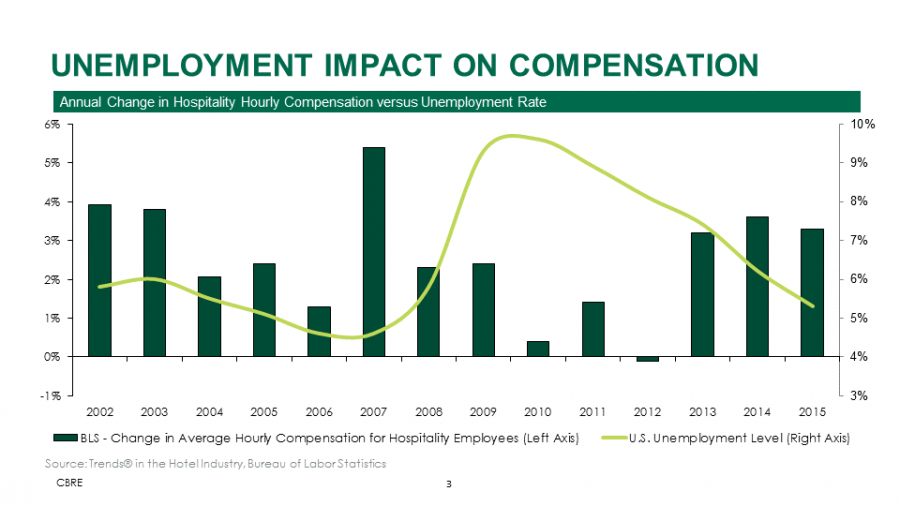 One of the primary reasons for the increase in compensation levels has been the continued decline in the national unemployment rate. Per the BLS, unemployment has declined from a peak of 9.6 percent in 2010 to 5.3 percent in 2015. Given their significant staffing requirements, hotels have had to increase compensation levels to remain competitive with other industries and attract employees. 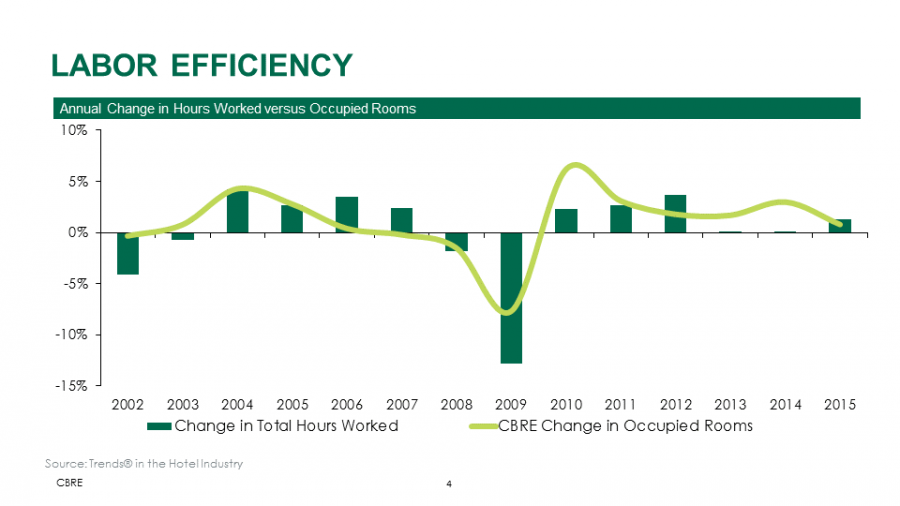 In order to offset the rise in compensation levels, hotel operators have attempted to control the other labor cost component – number of hours worked. As mentioned earlier, the increase in rooms occupied that drove the industry recovery from 2010 through 2012 also required greater levels of staffing. Thus, we saw continued growth in the total hours worked at hotels. In 2013 and 2014, it appears that managers could achieve more efficient use of the hours worked by their employees. During these two years, the number of occupied rooms at the average hotel in our Trends® sample increased by 4.8 percent. Despite the increase in the volume of business, staffing levels remained virtually flat during the same period.

Unfortunately, in 2015 some of the efficiencies appear to have been lost. During the year, the number of occupied rooms grew by 0.8 percent, but the total hours worked by employees increased by 1.3 percent. This indicates a slide in productivity.

Signs of declines in labor productivity are worrisome, especially since it will be difficult for hotel managers to control the compensation component of labor costs in the near term. In addition to expectations of continued low levels of unemployment, hoteliers face a variety of federal, state, and local legislative initiatives that could put upward pressure on salaries and wages:

Hotel labor costs have fluctuated between 29 and 35 percent of total revenue from 1980 to 2015. This relatively tight range indicates that hotel managers have, for the most part, controlled labor costs relative to business volume over the years. Given the factors discussed in this article, hotel operators will be challenged to continue to manage this significant expense in the future.