The U.S. lodging industry recovery from the depths of the great recession was characterized by strong growth in rooms revenue (RevPAR), concurrent with strict cost controls.  This combination resulted in double-digit growth rates for profits from 2010 through 2014.  Starting in 2015, market conditions changed.

The pace of RevPAR growth slowed down, while expenses increased at their highest level of real change in the past 20 years.  With RevPAR growth forecast to be somewhat muted for the next few years, the attention of owners and operators has how shifted on controlling expenses. 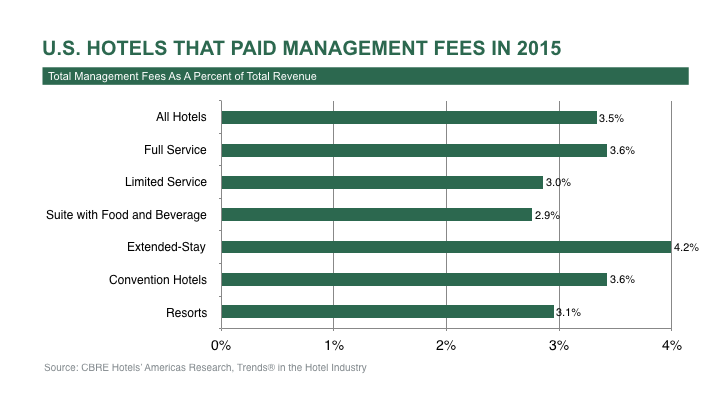 An expense that has consistently grown at pace greater than the average of all other costs from 2010 through 2015 has been management fees.  When growth of an expense item exceeds the overall average, owners typically become concerned.  However, since management fees are designed to reward operators for positive performance, excessive growth in management fees is not necessarily unwelcome.

Most management contracts include two components for compensation – a base fee and an incentive fee.  The base fee is typically charged as a percentage of total revenue.  Incentive fees, on the other hand, are paid to the management company once a certain profit threshold is reached.  Incentive fees are designed to make management more conscious of the bottom line since owners achieve their returns and pay their debts from profits, not revenue.

To gain a better understanding of this expense we analyzed the performance of hotels that reported paying a management fee for CBRE Hotels’ Americas Research’s annual Trends in the Hotel Industry survey of property-level operating statements. 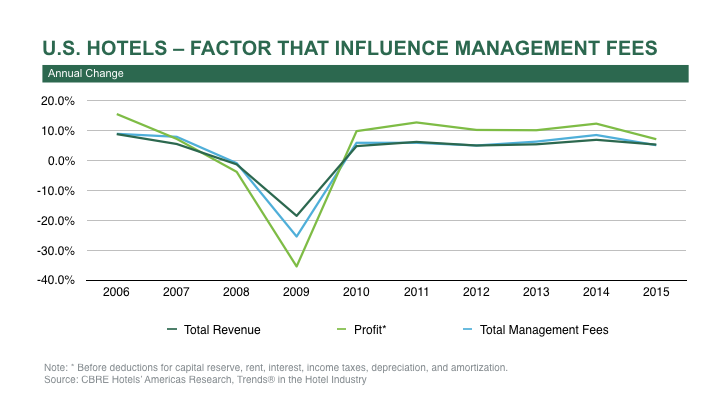 For the hotels that reported paying a management fee in 2015, the combined payments for the base and incentive fees averaged 3.5 percent of total revenue.  This expense ratio was the greatest at extended-stay hotels (4.2%), and lowest at suite hotels with food and beverage (2.9%).  Relative to the bottom-line, total management fees averaged 15.5% of profits.

During the 2010 to 2015 recovery period, management fees typically grew at a faster annual pace than total revenue.  In 2015, we observed a departure from that trend, when total revenue grew by 5.3 percent, but total management fees increased by just 5.1 percent.  Through 2014, profits maintained their double-digit annual growth rates.  Therefore, it can be assumed that the incentive fee component had a significant impact on the growth in management fees.  However, when the pace of profit growth slowed down to 7.1 percent in 2015, this would have reduced the increase in the incentive fee component, thus muting the pace of the rise in overall management fee expense. 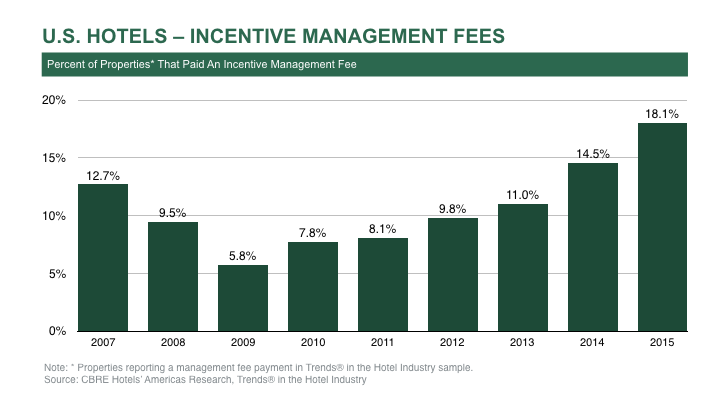 As profits have increased, it is not surprising that the incentive fee requirements within management contracts have been met at a rising number of hotels.  In 2015, 18.1 percent of the properties in our Trends sample that reported paying a management fee also reported paying an incentive fee.  This is up from a low of 5.8 percent in 2009, and 2014’s ratio of 14.5 percent.

Given the relatively strong 20.4 percent increase in profits achieved at hotels that did not pay the incentive fee in 2015 after paying in 2014, it can be assumed that the incentive management fee requirements at these properties are very strict.  Alternatively, the management contract for this group may have a revenue component to them.  The revenues for the hotels that paid a management fee in 2014 but not 2015 suffered a 1.2 percent decline in total revenue during the period. 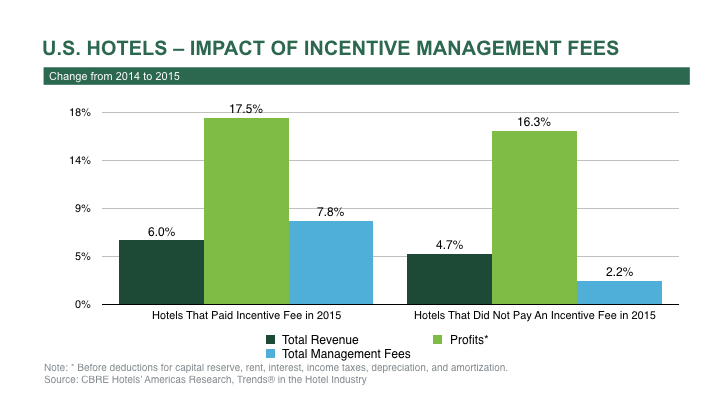 The expected operating environment for U.S. hotels for the next few years is one of limited growth in both revenues and profits.  Therefore, both owners and operators should brace for subdued growth in their respective paybacks:  returns for owners and management fee income for the management companies.

With revenue growth expected to be muted over the next few years, management companies will be even more incentivized to boost profit growth in order to earn more income for themselves.  However, with profit margins currently well above long-run averages, and labor costs on the rise, growing profits will be a challenge.  For owners that signed contracts with profit-based incentive clauses, these contract terms may prove to be of great value over the next few years.