The Components of Hotel Payroll

Per the Bureau of Labor Statistics, the average hourly compensation for a hospitality industry employee increased by 3.6 percent in 2016. In the hotel industry, labor costs average roughly 50 percent of total operating expenses.

Therefore, with STR reporting an annual RevPAR growth rate of 3.2 percent for the year, it is understandable that U.S. hotel owners and operators were concerned about their ability to increase profits. 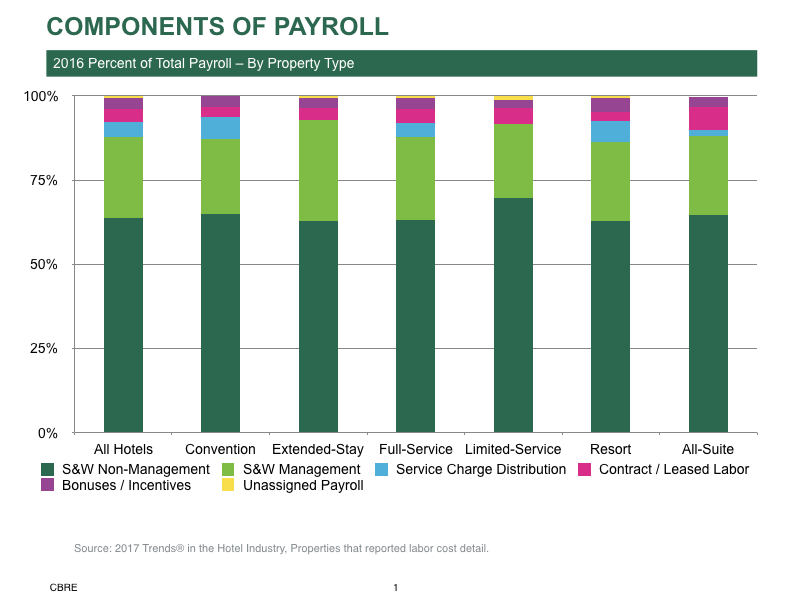 Based on the results of CBRE Hotels’ Americas Research’s 2017 edition of Trends in the Hotel Industry, hotel management was able to contain the growth of labor costs in 2016.  On average, the combined cost of the salaries, wages, other compensation and benefits paid to both employees and contracted/leased personnel at the hotels in the Trends sample increased by just 2.8 percent during the year.  Given in the 3.6 percent rise in compensation, the 2.8 percent growth in total labor costs implies that hotel managers implemented cost saving measures such as reducing the total hours worked at their properties, or improving employee productivity.

Despite their best efforts, labor costs still accounted for 90 percent of the 1.6 percent rise in total operating expenses from 2015 to 2016.  Further investigation reveals that it was the non-benefit component (payroll) that was the main driver of labor costs during the year.  Payroll by itself accounted for 66.8 percent of the 1.6 percent total operating expense growth rate.

The CBRE Trends survey tracks five payroll sub-categories within each operating and undistributed department of a hotel.  The sub-categories are consistent with the 11th edition of the Uniform System of Accounts for the Lodging Industry (USALI).  They are:

A sixth sub-category is used to track other compensation data that is not identified, but this totals just 0.6 percent of payroll costs. 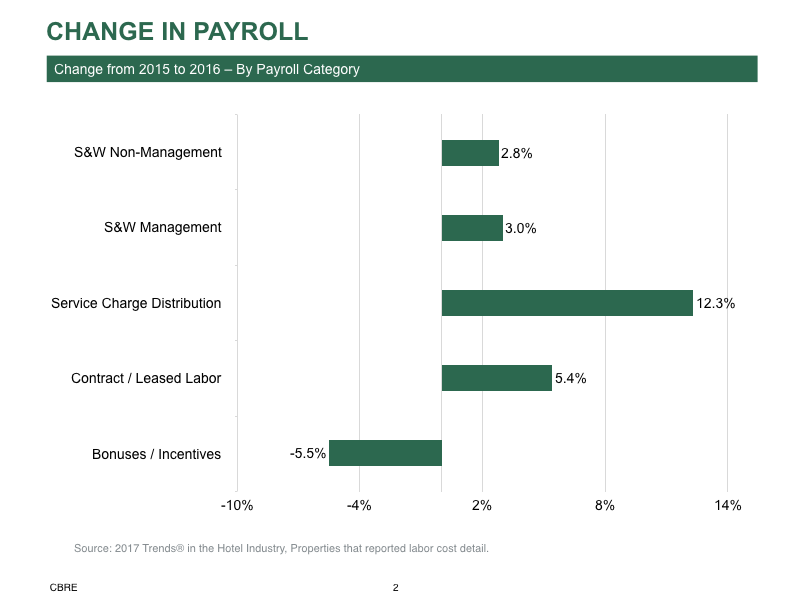 Analyzing the salaries, wages, service charges, contact/leased labor and bonus payments made by U.S. hoteliers in 2016 provides some insight into how they were able to contain the increase in labor costs to just 2.8 percent.  The following paragraphs summarize our analysis of the 2016 labor cost data from 4,028 properties in the Trends sample that provided detailed labor cost information in conformity with the 11th edition of the USALI.  For the purposes of this analysis, we are going to refer to the entirety of non-benefit compensation as “payroll.” 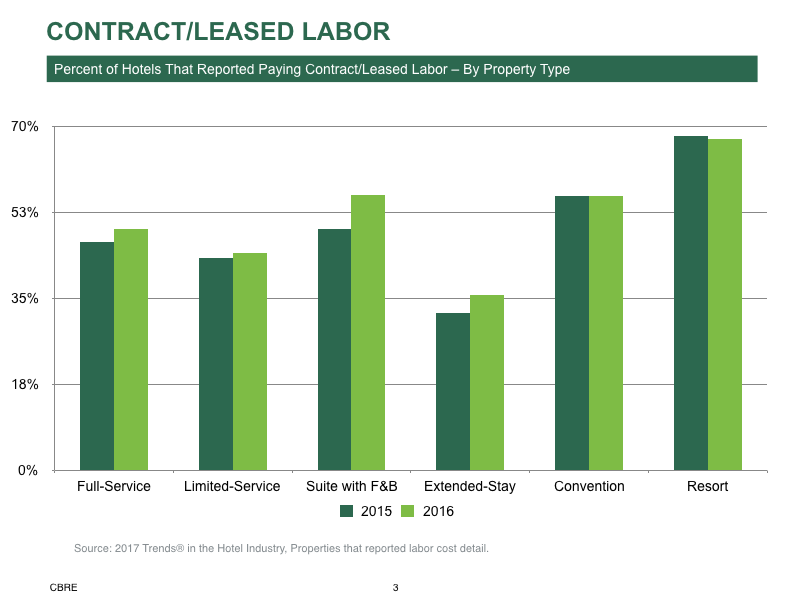 From 2015 to 2016, the payroll component that saw the greatest percentage increase was service charge distributions (12.3%).  In many jurisdictions, management has limited control of these mandatory payments that must be made to employees.  The increase in payments made to contact/leased labor (5.4%) exceeded the growth in salaries and wages paid to management (3.0%) and non-management (2.8%).  The slowdown in GOP growth most likely contributed to the 5.5% decline in bonus payments made in 2016, compared to 2015. 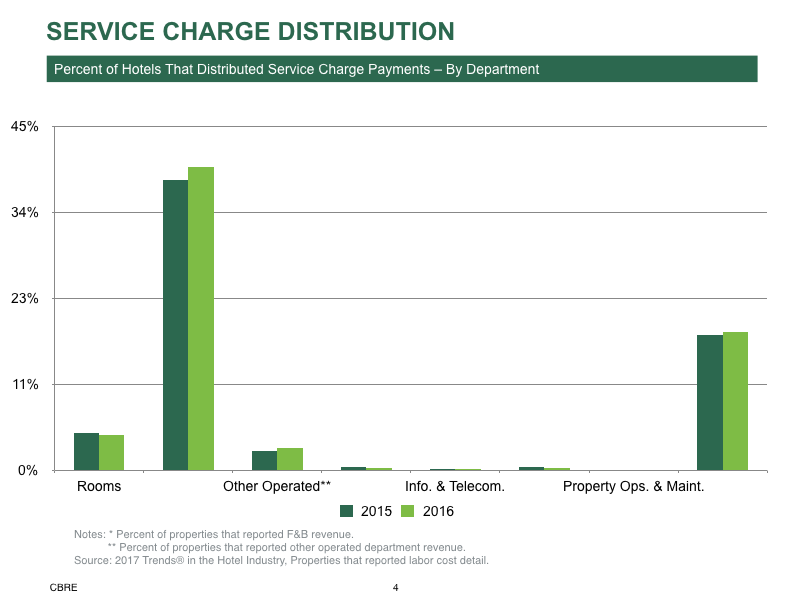 Overall, the incidence of paying service charges grew from 17.7 percent of the sample in 2015 to 18.1 percent in 2016.  Resort hotels are the property type most likely to pay a service charge to their employees (62.9%).  As expected, the distribution of service charges was most frequently observed in the food and beverage department (39.7%), followed by the rooms department (4.6%).

While the aggregate dollar amount of bonus payments made by the study sample declined by 5.5 percent from 2015 to 2016, the number of hotels that paid bonuses during the year increased.  In 2015, the properties that paid bonuses comprised 89.2 percent of the total sample.  In 2016, this metric increased to 89.7 percent. 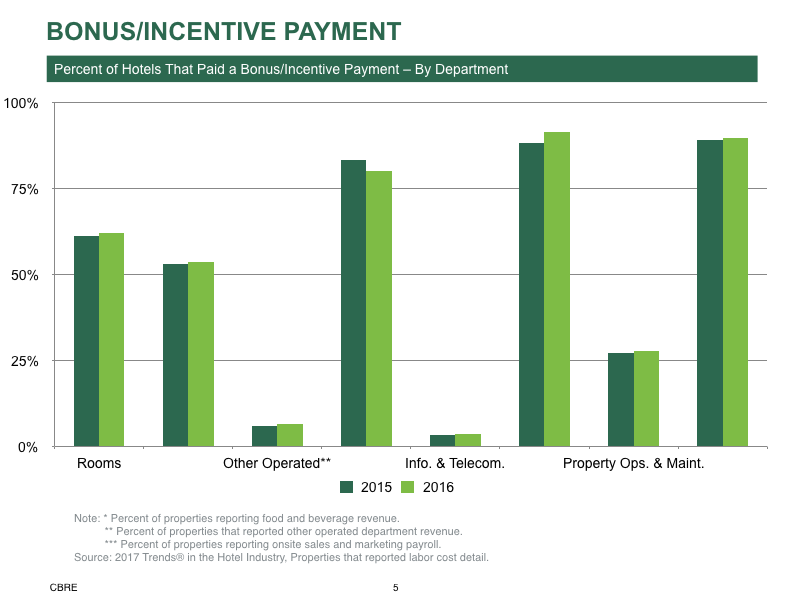 Employees in the sales and marketing (91.6% of hotels) and administrative and general (80.1%) departments were mostly likely to be paid a bonus.  This is consistent with the typical compensation agreements for general managers, as well as sales personnel.  Least likely to receive a bonus in 2016 were employees in the other operated and information and technology departments.

Given the political and economic landscape for the next few years, it appears there will be more pressure on the payroll component of labor costs versus the benefits piece.  Accordingly, hoteliers need to pay attention to the increased labor reporting standards introduced in the 11th edition of the USALI.  With greater transparency, owners and operators are better able to analyze the many components of labor costs, and act accordingly.

1 Before deductions for management fees and non-operating income and expenses.