From 2010 through 2015, U.S. hotels enjoyed above long-run average revenue and profit growth.  Over the six-year period, total operating revenue increased at a compound annual growth rate (CAGR) of 5.8 percent, while gross operating profits grew at a CAGR of 8.9 percent.

Therefore, when U.S. hoteliers sat down in the fall of 2015 to prepare their budgets for 2016, it is no surprise that they believed the strong upward momentum in revenue and profit growth would continue. 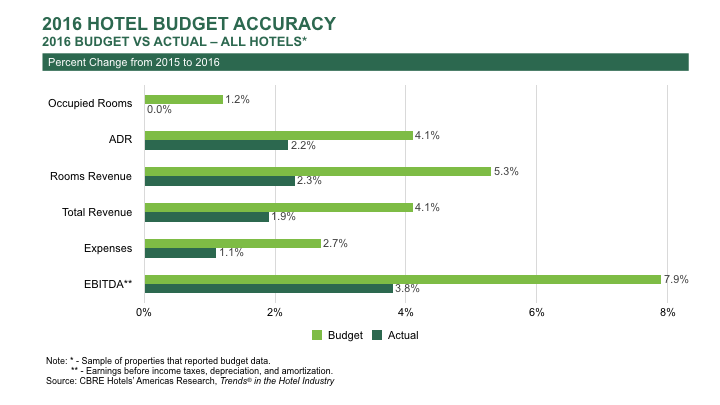 Unfortunately, 2016 was a disappointment.  Revenue and profits increased, but not at the levels that were budgeted.  Occupancy and average daily rate (ADR) growth fell short of expectations, which led to a revenue shortfall.  While the lower occupancy levels resulted in less expense growth, it was not enough to offset the limited revenue growth.  Therefore, the goals for increases in profits were not met.

As general managers, controllers, and directors of sales prepare their budgets and marketing plans for 2018, we present the results of our most recent look at the budgeting accuracy of U.S. hotel operators.  From CBRE Hotel’s Americas Research’s Trends® in the Hotel Industry database, we identified 629 operating statements that contained both actual and budgeted data for 2016.  Using these statements, we compared the revenues and expenses projected for 2016 with what was actually earned and spent during the year.

Since 2001, CBRE Hotels’ Americas Research has assessed the accuracy of hotel budgets.  Over the past 16 years, one trend has become predictable.  During times of industry prosperity, hotel budgets are more accurate than during industry downturns. 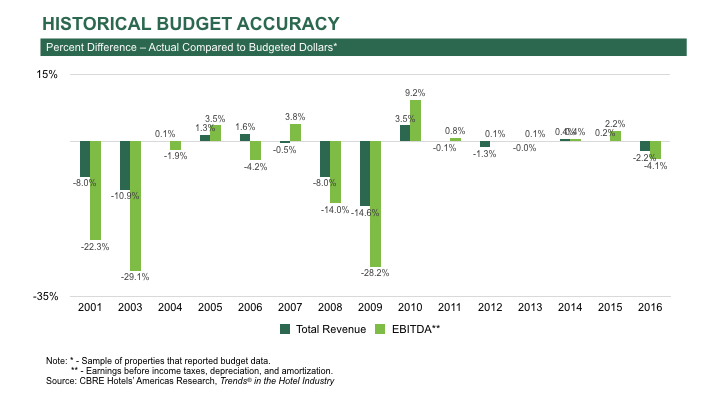 During the historical years of growth, hotels beat their budgeted revenue goals by an average of just 0.5 percent, while profit goals were exceeded by 1.4 percent.  For the purpose of this analysis, profits are defined as earnings before income taxes, depreciation and amortization (EBITDA).

Given this historical trend, along with forecasts for a continued healthy environment for travel, 2016 budgets had the potential to be very accurate.  Unfortunately, accuracy slipped during the year.  The hoteliers in our sample forecast a 4.1 percent increase in total operating revenue for 2016.  Unfortunately, revenues grew by just 1.9 percent during the year, for a miss of 2.2 percent.

On the bottom-line, hoteliers projected a strong 7.9 percent gain in EBITDA.  Ultimately, the revenue deficit was too much to make up.  EBITDA at the properties in our sample increased by a modest 3.8 percent, or a budget deficiency of 4.1 percent.

The shortage in revenue was the result of budget gaps in both occupancy and ADR.  For 2016, the hotel managers in our sample forecast a 1.2 percent occupancy gain along with a 4.1 percent increase in ADR.  At the end of the year, however, occupancy for these properties remained flat, while ADRs grow only 2.2 percent. 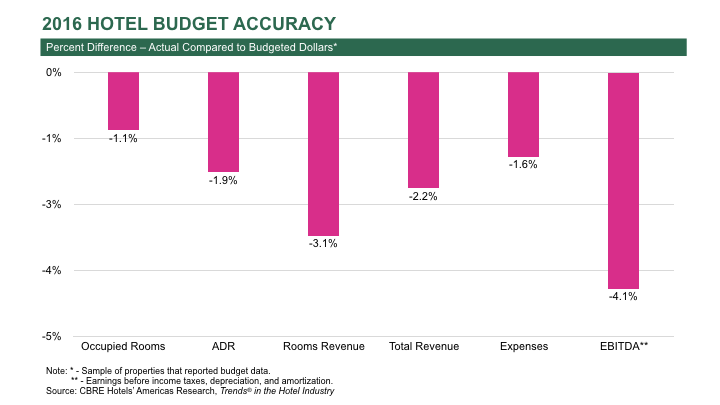 The net result was a full three-point budget deficit in rooms revenue, which contributed significantly to the 2.2 percent shortfall in revenue.  Given the magnitude of the gap in rooms revenue, it can be assumed that the budgeted changes in other hotel revenues were more accurate.

By accommodating fewer rooms than budgeted, the hotels in our sample did incur less expense growth than planned.  During 2016, expenses at the properties in the study sample increased by 1.1 percent.  This is 1.6 percentage points less than the budgeted expense growth rate of 2.7 percent.

According to the September 2017 edition of Hotel Horizons, CBRE Hotels’ Americas Research is projecting that a 2.4 percent increase in RevPAR will lead to a 2.3 percent gain in total hotel revenues during 2018.  Concurrently, operating expenses are forecast to rise by 2.6 percent, leading to an improvement in profits of roughly 1.8 percent.

On the one hand, the positive market forecast indicates that the odds are favorable for U.S. hotels to achieve their budgeted targets in 2018.  However, given the modest gains expected for both revenues and profits, the softness of the 2018 forecast could contribute to budget deficits during the year.  Pressure from owners makes it difficult for hotel managers to prepare conservative budgets.  Let’s just hope any inflated expectations for revenues and profits that might be contained in the 2018 budgets are not too exaggerated.