Did you read last year that the penthouse triplex at the Pierre Hotel in New York City was for sale for $125 million, the highest price ever listed for a New York hotel residence? At 13,660 square feet, that works out to $9,150 per square foot.

The major feature of the triplex is the 3,500 square foot Grand Salon which originally was the Club Pierrot, an exclusive supper club when the hotel opened in 1930. But in the depths of the Depression, the Club was disbanded soon thereafter. Later, the Pierre Roof ballroom was the favored site for debutante receptions, weddings and gala banquets. It often featured Shep Fields and his Rippling Rhythm orchestra. During hot New York summers before effective air conditioning, the Pierre advertised "the highest and coolest hotel roof in Manhattan" to compete with the Starlight Roof at the Waldorf-Astoria.

Designed by Schultze & Weaver (who also designed the Waldorf-Astoria and the Sherry-Netherland in New York and the Breakers Hotel in Palm Beach, Florida), the 42-floor, 714-room Pierre offered 73 large suites and 200 transient rooms. 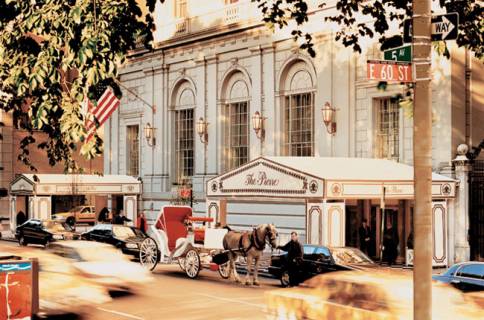 In 1928 millionaire Elbridge T. Gerry died leaving a large family house at 61st Street and Fifth Avenue to his son who did not want to live in it. Backed by a group of financiers who admired his talent, restaurateur-turned-hotelier Charles Pierre Casalasco raised the then-astounding sum of $15 million from a group of investors that included Otto H. Kahn, Finley J. Shepherd, E.F. Hutton and Walter P. Chrysler to create a hotel that he hoped would be “a majestic monument to simplicity, beauty and refinement.”

During the Depression, the Pierre Hotel went into bankruptcy in 1932 and was bought six years later by oilman J. Paul Getty for $2.5 million. In 1958, Getty converted the Pierre into a cooperative and subsequently sold some of the hotel's suites to the likes of Cary Grant and Elizabeth Taylor. Soon thereafter, the Pierre Roof ballroom was closed because the new coop-owners did not want to wait for elevator service when the rooftop ballroom was in use. For some 30 years, the ballroom was used for storage of old hotel files, furniture, equipment and for an upholstery shop.

Ultimately, 73 coop-owners purchased ownership of their own spectacular apartments as well as the transient guestrooms, restaurant, lounges, meeting rooms and public spaces. Getty built an adjacent office building on Madison Avenue and leased space in order to enlarge the Pierre's second floor ballroom.

In the early morning hours of January 2, 1972, five men carrying suitcases and wearing tuxedos entered the lobby of the Pierre Hotel. They proceeded to handcuff 19 startled guests and employees and in less than two-and-a-half hours took from its safe deposit boxes an estimated $10 million in precious gems and cash. The story of this Guinness Book record-holder robbery is told in Ira Berkow’s, The Man Who Robbed the Pierre, Athenaeum, New York (1987). Operations changed hands several more times until Trust House Forte leased the Pierre in 1973. In 1986, a triple net lease was signed by the Toronto-based Four Seasons Hotel Company which needed a landmark hotel in New York City.

In 1990, the coop board decided to renovate the 41st, 42nd and 43rd floors and in 1993 sold them for $12 million to Lady Mary Fairfax, an Australian media heiress whose husband had recently died. Lady Fairfax hired the design firm of Balamotis McAlpine Associates to create a stunning palace in the sky. They installed an 18-foot high limestone fireplace and mantle (originally from a French chateau) at the east end of 75' x 46' x 23' Grand Salon. Lady Fairfax told me that the chandelier was salvaged from a demolished Melbourne, Australia theater. Some six years later, Lady Fairfax sold the triplex to investment banker Martin Zweig for $21.5 million, then a record.

Mr. Zweig and his wife moved into the penthouse with their museum-quality collection of popular culture memorabilia. They displayed guitars and performance attire of major rock musicians from Jimi Hendrix to Eric Clapton to Bruce Springsteen as well as team jerseys of sports icons Michael Jordan and Wayne Gretsky. The penthouse provides 360-degree views of Manhattan, Central Park, the Hudson and East Rivers and beyond. When Mr. Zweig died at age 70, the penthouse was put on the market at a price that reflects its unique qualities. In 2016, the asking price for the triplex was $57 million.

In 2005, The Pierre Hotel was leased by the Taj Hotels, Resorts and Palace of India. Aside from the 73 coop apartments, the Pierre has 140 transient rooms and 49 suites. Since 2009, the Pierre Hotel has earned the AAA Five Diamond Award.

Finally, let me give special credit to architect I. N. P. Stokes, nephew of the builder of the Ansonia Hotel, who wrote the Iconography of Manhattan Island which was published from 1915 to 1928. Stokes described his extraordinary effort in terms that applies to those of us who spend years doing the research and the writing of our books:

“It was a labor of love, and brought me a good deal of pleasure, and some satisfaction, although I now realized that it involved an expenditure of time, energy and money, which was probably out of proportion to the results achieved, and consumed many hours which should have been devoted, not only to my office, but to my family, and to social amenities, so that, on the whole, I suspect that it has proved a rather selfish, perhaps even a narrowing, influence in my life.”

Disclosure:  I served for six years as Executive Vice President of the 795 Fifth Avenue Corporation, the Pierre's owning entity, to help oversee the then-lessee, Four Seasons Hotels and Resorts and make certain that service was impeccable for the 73 coop-owners.

Excerpted from Built To Last: 100+ Year-Old Hotels in New York