The Moana Hotel opened on March 11, 1901, as Waikiki’s first hotel. It is known as the “First Lady of Waikiki.” In the late 1890s Waikiki was a swampy backwater area surrounded by duck ponds and taro fields.

The beautiful beach was the site of homes of Hawaiian royalty and the wealthy kamaainas including the Honolulu landowner Walter Chamberlain Peacock. In 1896 Peacock incorporated the Moana Hotel Company and hired architect Oliver G. Traphagen (1854-1932) to design it.

Traphagen designed many buildings in Duluth, Minnesota, for both public and private owners which show the influence of the Richardson Romanesque style. Because his daughter’s health required a warmer climate, the family relocated to the soon-to-be-annexed Republic of Hawaii in October 1897. Thanks to his sterling reputation, he soon became the most prolific and highly regarded architect in Honolulu. 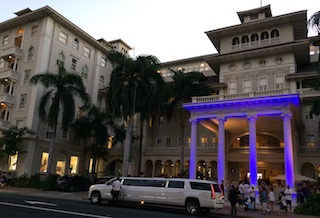 The original Moana Hotel was a four-story wood structure which featured an elaborately designed lobby which extended to outdoor lanais, the Banyan Court and the ocean. The Moana’s architecture was influenced by popular European styles with Ionic columns, intricate woodwork and plaster detailing throughout the building. It was designed with a grand porte-cochere on the street side and wide lanais on the ocean side. Some of the original 75 guestrooms had telephones and bathrooms. The hotel featured a billiard room, saloon, main parlor, reception area and a library. The Moana had the first electric-powered elevator in Hawaii which is still in use today. Other design elements of the original structure that survive include extra-wide hallways to accommodate steamer trunks, high ceilings and cross-ventilation windows to cool the rooms (prior to air conditioning).

The hotel’s first guests were a group of 114 Shriners, hosted by the Aloha Temple Shriners. In 1905 Peacock sold the Moana Hotel to Alexander Young, a prominent Honolulu businessman who had other hotel interests. After Young’s death in 1910, his Territorial Hotel Company continued to operate the Moana until the Matson Navigation Company purchased it in 1932 for $1.6 million.

In 1905 the Moana Hotel was at the center of one of America’s legendary mysteries. Jane Stanford, co-founder of Stanford University and widow of California Governor Leland Stanford, died in a Moana Hotel room of poisoning. An account of the events says that on the evening of February 28 at the hotel, Stanford had asked for bicarbonate of soda to settle her stomach. Her personal secretary, Bertha Berner, prepared the solution, which Stanford drank. At 11:15 PM, Stanford cried out for her servants and Moana Hotel staff to fetch a physician, declaring that she had lost control of her body. Robert W. P. Cutler, who wrote the book The Mysterious Death of Jane Stanford, recounted what took place upon the arrival of the Moana Hotel physician, Dr. Francis Howard Humphris:

As Humphris tried to administer a solution of bromine and chloral hydrate, Mrs. Stanford, now in anguish, exclaimed, “My jaws are stiff. This is a horrible death to die.” Whereupon she was seized by a tetanic spasm that progressed relentlessly to a state of severe rigidity: her jaws clamped shut, her thighs opened widely, her feet twisted inwards, her fingers and thumbs clenched into tight fists, and her head drew back. Finally, her respiration ceased.

Stanford was dead from strychnine poisoning and the identity of whoever killed her remains a mystery. Today, the room in which Stanford died no longer exists, having been removed to make room for an expansion of the lobby. 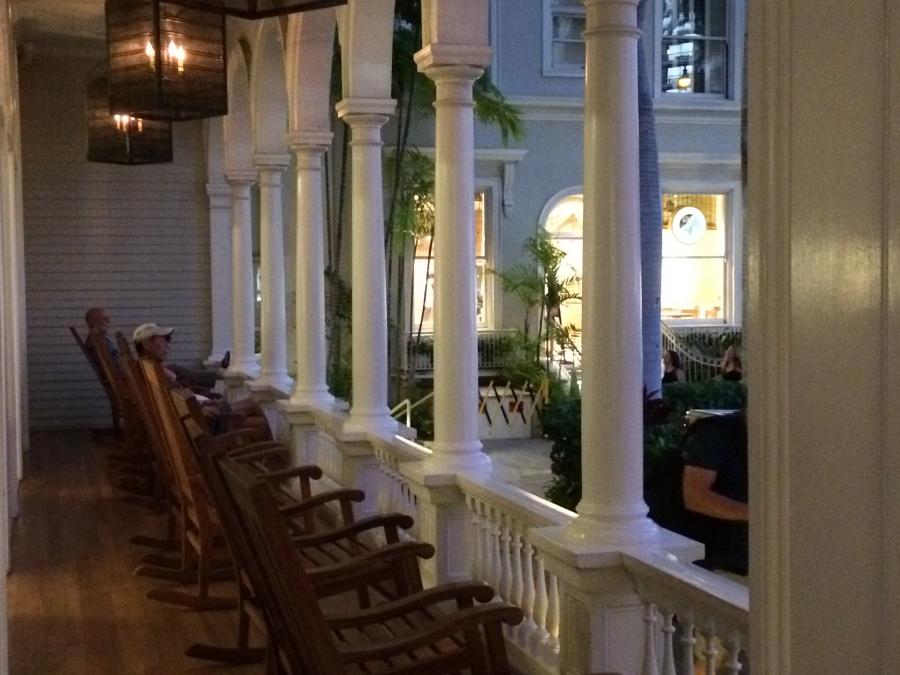 The Moana grew along with the popularity of Hawaiian tourism. Two floors were added in 1918, along with Italian Renaissance-styled concrete wings on each side of the hotel, creating the H-shape seen today. In the 1930s the hotel was known for a few years as the Moana-Seaside Hotel & Bungalows. The bungalows were additional buildings constructed on the large plot of land directly across Kalakaua Avenue. The hotel’s outward appearance was altered slightly over the years, including “updates” to such designs as Art Deco in the 1930s and Bauhaus in the 1950s. From 1935 to 1975 the Moana’s courtyard hosted the Hawaii Calls live radio broadcast. Legend has it that listeners mistook the hiss of the radio transmission as the waves breaking on the beach. When learning of this, the host instructed the sound man to run down to the waterfront to actually record the sound, which became a staple of the show.

In 1952 Matson built a new hotel adjacent to the Moana on the southeast side, called the SurfRider Hotel. In 1953 Matson demolished the Moana’s bungalows across the street and, two years later, opened the new Princess Kaiulani Hotel on the site. Matson sold all of their Waikiki hotel properties to the Sheraton Company in 1959. Sheraton sold the Moana and the SurfRider to Japanese industrialist Kenji Osano and his Kyo-Ya Company in 1963, though Sheraton continued to manage them. In 1969 Kyo-Ya built a towering new hotel on the Moana’s northwest side. They named it the Surfrider Hotel. The older SurfRider Hotel on the other side was turned into part of the Moana, named the Diamond Head Wing.

In 1989 a $50 million restoration (designed by Hawaii architect Virginia D. Murison) restored the Moana to its 1901 appearance and incorporated the 1969 Sheraton Surfrider Hotel and the 1952 SurfRider Hotel buildings with the Moana Hotel building into one beachfront resort with a common lobby, renaming the entire property the Sheraton Moana Surfrider. The restoration has cemented the Moana as one of Waikiki’s premier hotels. It includes 793 rooms (including 46 suites), a freshwater swimming pool, three restaurants, a beach bar and a poolside snack bar.

The property has been recognized with the President’s Historic Preservation Award, the National Preservation Honor Award, the Hawaii Renaissance Award, and the Hotel Sales and Marketing Association International Golden Bell Award. The main historic section of the hotel, The Banyan Wing, has been listed on the National Register of Historic Places.

In 2007 Starwood Hotels & Resorts, the management company of the Moana, rebranded the hotel from a Sheraton Hotel to a Westin Hotel. The name of the hotel became Moana Surfrider, A Westin Resort & Spa. The 1901 wing is now known as the Historic Banyan Wing. The low-rise 1952 SurfRider Hotel building is today the Diamond Wing. The 1969 Surfrider Hotel building is now called the Tower Wing.

In the center of the Moana Surfrider’s courtyard stands a large Indian banyan tree which was planted in 1904 by Jared Smith, Director of the Department of Agriculture Experiment Station. When planted the tree was nearly seven feet tall and about seven years old. It now stands 75 feet high and spans 150 feet across the courtyard. 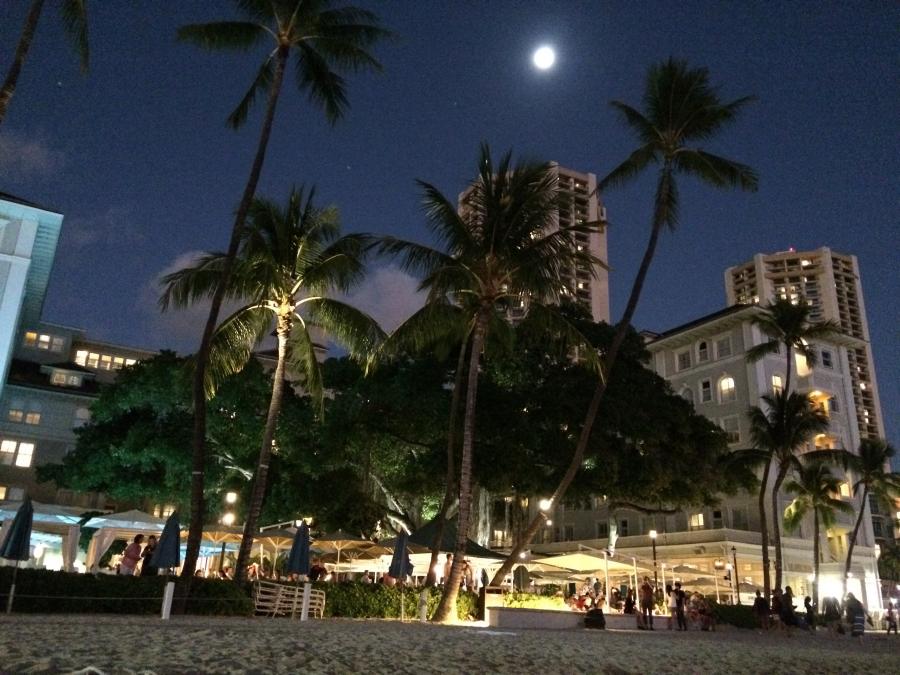 In 1979 the historic tree was one of the first to be listed on Hawaii’s Rare and Exceptional Tree List. It has also been selected by the Board of Trustees of the America the Beautiful Fund as the site for a Hawaii Millennium Landmark Tree designation, which selects one historic tree in each state for protection in the new millennium.

The hotel was the base of operations for about 24 White House staffers who accompanied Barack Obama to his Winter White House at Plantation Estate during Christmas visits.

The Moana Surfrider, a Westin Resort & Spa, is a member of Historic Hotels of America, the official program of the National Trust for Historic Preservation.

Excerpted from Built To Last: 100+ Year-Old Hotels West of the Mississippi AuthorHouse 2017