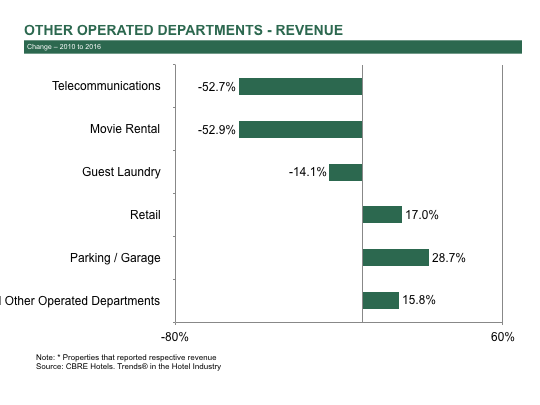 The recovery of the U.S. lodging industry since the depths of the 2008/2009 recession has been strong.  From 2010 through 2016, rooms revenue for the properties that participate in our firm’s annual Trends in the Hotel Industry survey increased by 38.8 percent, while total hotel revenue grew by 39.8 percent.  However, during this same seven-year period, the revenue generated by the other operated departments increased by just 15.8 percent. 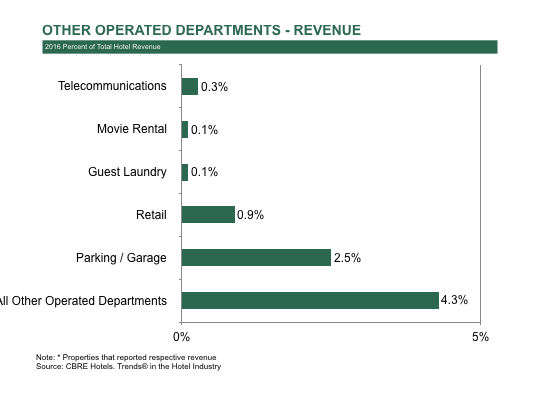 The following paragraphs describe recent trends in revenues, expenses, and profits for five other operated departments.  In all circumstances, these data come from revenue generating sources that meet the Uniform System of Accounts for the Lodging Industry standards to be classified as other operated departments, as opposed to miscellaneous income. 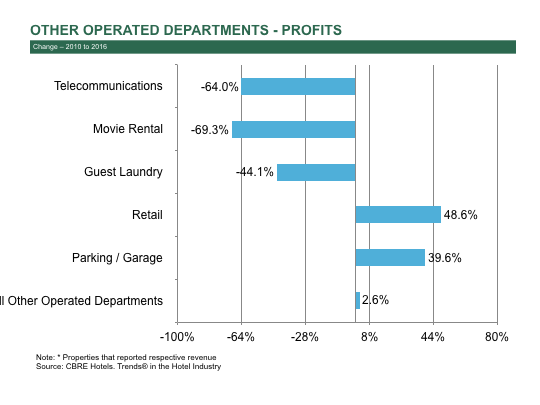 Since the sole expenses associated with these revenue sources are the telephone and movie rental costs charged by the respective service providers, it makes sense that we have observed commensurate declines in the expenses within these two departments.  Unfortunately, the expense cuts were not sufficient to prevent declines in profitability.  From 2010 to 2016, profits fell by 64.0 percent within the telecommunications department, and 69.3 percent for movie rental.

Just as cell phones have had a negative impact on telecommunications revenue, the proliferation of casual business attire has reduced the revenue hotels receive from providing guest laundry and valet services.  From 2010 to 2016, the revenue received from guest laundry has declined by 14.1 percent, while the profits this department generates have fallen by 44.1 percent.

Not all other operated departments are on the decline.  U.S. hotels have enjoyed increased revenues and profits from some sources that have either evolved, or been dormant.

The face of retail offerings has changed significantly at most U.S. hotels.  The traditional “newsstand” that was either leased out, or operated at a loss, has been replaced with front desk kiosks the sell newspapers, toiletries, snacks, soft drinks, and microwavable foods.  Further, these kiosks are now appearing in limited and select-service properties that historically did not offer any retail services to their guests. 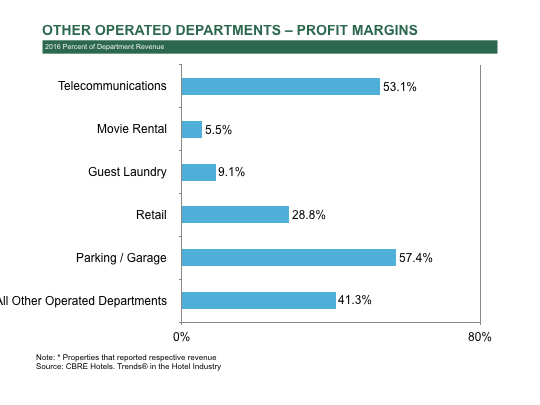 From 2010 to 2016, the revenues generated by hotel retail outlets increased by 17.0 percent.  Because of the changing nature of the products offered, as well as the staffing of the kiosks by front desk personnel (whose costs get recorded in the rooms department), the department expenses to run retail operations have increased by just 11.3 percent.  The net result has been a 48.6 percent boost in retail department profits during the past seven years.

Since 2010, hoteliers have found parking operations and garages to be a lucrative source of income.  The incidence of suburban hotels charging for parking is on the rise, as well as airport properties expanding their overnight parking services.  Accordingly, parking revenue has increased by 28.7 percent from 2010 to 2016.  For those hotels that charge for parking, revenues equaled 2.5 percent of total revenue in 2016.  More importantly, since parking is a relatively high margin operation, the profits from parking operations have risen by 39.6 percent over the past seven years.

With RevPAR forecast to grow less than three percent on an annual basis through 2021, hotel owners and operators are looking for other sources of revenue to bolster the top line.  As we have seen historically, social and economic changes influence the way guests spend money within a hotel.  Hoteliers are challenged to develop new, or expand existing, other operated departments that offer the services today’s guests demand, and value.  Concurrently, owners and operators need to eliminate, downsize or adjust those other operated departments that no longer meet guest needs.