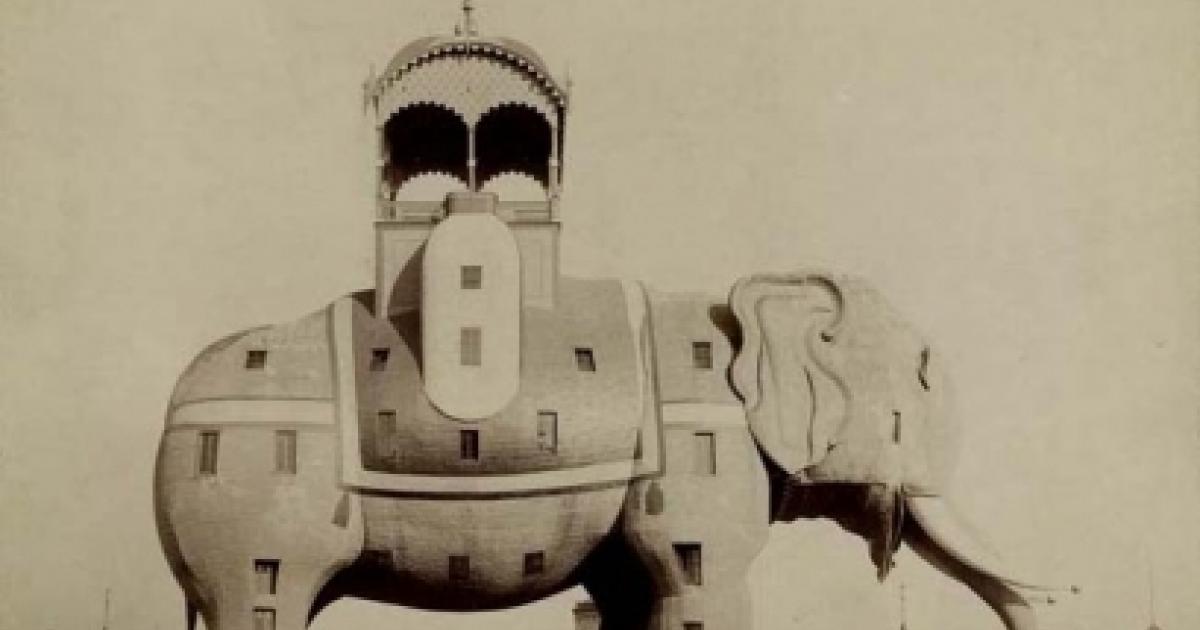 When Coney Island went from a sandbar resort in Brooklyn to the city’s biggest beachfront playground in the 1880s, all sorts of attractions popped up. There were beer halls, roller coasters, so called “freak shows” and a one-of-a-kind gaudy structure known as the Elephantine Colossus.

It was constructed in 1884 by James V. Lafferty (1856-1898) who thought that the next great architectural step was to design buildings in the shape of animals, birds and even fish. During the twelve years before it burned down, the jumbo-size hotel in Brooklyn was known as the Colossus of Architecture and the Elephantine Colossus. A 1924 Brooklyn Eagle article gave the dimensions as 175 feet tall and 203 feet long.

According to “Brooklyn… and How It Got That Way” by David W. McCullough (1983), the building had 31 guestrooms and was made of wood with tin sheathing. It had long curving tusks and an oversize howdah.

“To get to the observatory in the howdah, customers entered the hind leg marked Entrance and wound up a circular flight of stairs. The other rear leg- each was 60 feet around- was the exit, and one of the front legs was a tobacco shop. At night, beacons shone out of the four-foot-tall eyes.”

Ten years earlier, the 25-year-old Lafferty constructed the Inexhaustible Cow at West Brighton. This popular stand provided drinks, from milk to champagne for parched Coney visitor throats. Lafferty had tested his elephant idea a few years near Atlantic City with a smaller structure which he called Lucy the Elephant. Lafferty was backed by his family’s wealth and driven by a vision for a new kind of real estate promotion that would lure prospects to the desolate stretch of sand dunes where he hoped to sell plots for vacation cottages.

Atlantic City at that time was fast growing into a Victorian vacation metropolis centered around the Absecon Lighthouse, the landmark that was then the symbol of the seaside resort. Lafferty wanted to establish a similarly impressive landmark and sense of place for his own new development in “South Atlantic City.” To gain the attention of the public and press, he chose what was then a startling concept: a building shaped like a gigantic animal. To fully appreciate Lafferty’s feat, it’s important to understand that in the 1880s, the idea of erecting a structure shaped like an animal was unheard of even as the new engineering techniques and technologies of a quickening industrial age made such complicated architectural projects theoretically possible.

In 1881, Lafferty retained an architect to design a building in the shape of an elephant from the exotic land of the British Raj celebrated in the period’s illustrated adventure magazines. Simultaneously retaining a patent attorney, Lafferty also sought to prevent anyone else in the United States from constructing animal-shaped buildings unless they paid him royalties. The U.S. Patent Office examiners found Lafferty’s to be a novel, new and technologically significant concept. In 1882, they granted him a patent giving him the exclusive right to make, use or sell animal-shaped buildings for seventeen years.

More sculpture than carpentry, the construction of Lucy involved hand-shaping nearly a million pieces of wood to create the required load supports for a 90-ton structure with an outsheath of hammered tin. The amazing elephant building, which did generate the national publicity Lafferty hoped for, was the first of three he constructed. The largest—a gargantuan, twelve-story structure twice as large as Lucy—called the “Elephantine Colossus” was erected in the center of the Coney Island, New York, amusement park. The third Lafferty elephant, slightly smaller than Lucy, was “the Light of Asia,” erected as the centerpiece of another Lafferty land sale program in South Cape May. The Colossus later burned down, the victim of a fire on September 27, 1896 and the Light of Asia was torn down, leaving Lucy the only survivor.

By the late 1880s, although the elephant buildings were drawing crowds of awed spectators, Lafferty’s over-extended real estate ventures were losing money. Lucy and his surrounding Absecon Island holdings were sold to John and Sophie Gertzer, who operated the elephant building alternately as a tourist attraction, miniature hotel, private beach cottage, brothel and tavern. Meanwhile, “South Atlantic City” developed into a thriving shore community that later changed its name to Margate. In 1920, Lucy the Elephant tavern was forced to close by the passage of Prohibition. When that law was repealed in 1933, she immediately became a bar again. In the 1950s, as a new America emerged from World War II to build webs of superhighways and adopt airplanes as a cheap new way of travel to exotic vacation destinations, Lucy faded from the public’s attention and fell into disrepair. By the 1960s, she was a dilapidated public safety hazard slated to be torn down.

In 1969, just ahead of the wrecker’s ball, the “Save Lucy Committee” formed by the Margate Civic Association began two decades of public struggles that moved Lucy to beachfront land owned by the city and restored the peculiar structure as a historic site and tourist attraction. Since 1973, enough money has been collected in dedicated “Save Lucy” campaigns to restore the structural integrity and exterior of the 90-ton wood-and-tin pachyderm. But the fundraising battle continues today as the group works to raise additional money required to underwrite the never-ending costs of maintenance and fighting rust, rot and even lightning strikes on the great wooden beast.