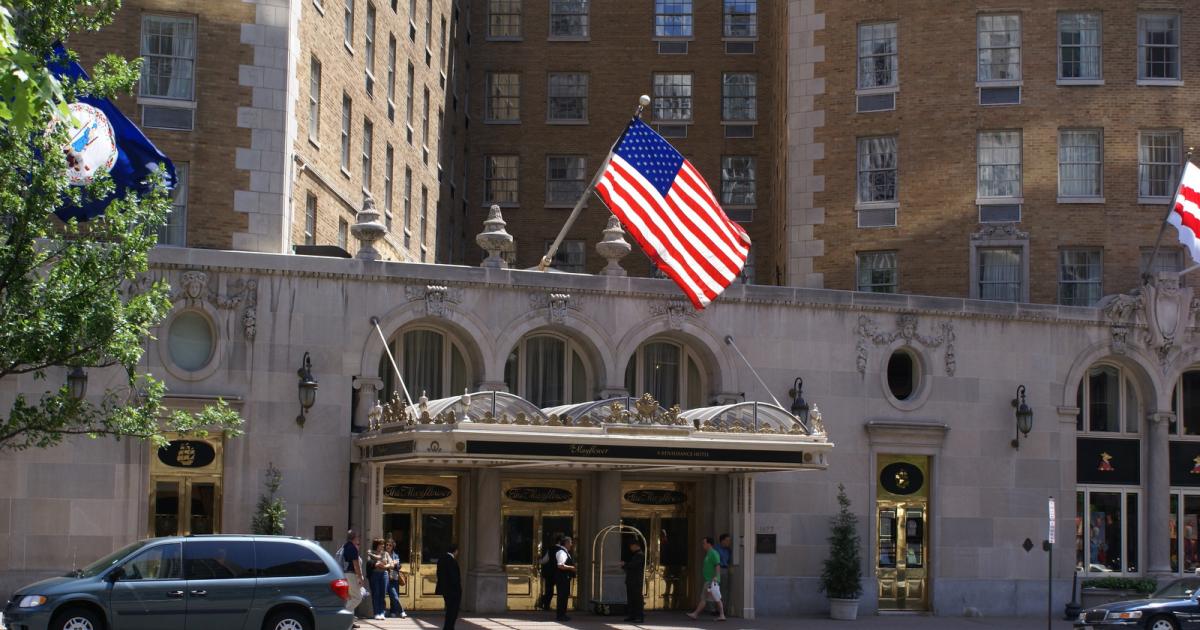 Opened on February 18, 1925 with 440 guestrooms. It is known as the “Grande Dame of Washington”, the “Hotel of Presidents” and as the city’s “Second Best Address” (the White House is the first).

The Mayflower Hotel was built by Allen E. Walker who planned to name it The Hotel Walker. He retained Warren & Wetmore, architects who had designed New York’s Commodore, Biltmore, Ambassador Ritz-Carlton and Vanderbilt Hotels. The supervising architect was Robert F. Beresford who had worked for the Supervising Architect of the Treasury and the Superintendent of the Capitol. When Walker sold his interest to C.C. Mitchell & Company, the new owners changed the name to the Mayflower Hotel in honor of the 300th anniversary of the landing of the Mayflower and the Pilgrims at Plymouth Rock.

The Mayflower Hotel’s guest suites had a sitting room, dining room, bath and up to seven bedrooms. Some had kitchenettes and drawing rooms with fireplaces. The hotel offered amenities unmatched by any other hotel in the United States. This included air conditioning in all the public rooms and ice water and fans in all guestrooms. Services included daily maid service, a laundry, a barber shop, a beauty salon, a garage, a telephone switchboard, and a small hospital staffed by a doctor. The Mayflower featured three restaurants and a Grand Ballroom with a proscenium stage.

In 1925, an Annex to the Mayflower was built with a Presidential Suite and a Vice Presidential Suite. The second through eighth floors of the Annex contained guest suites each with five bedrooms and baths. The first floor of the Annex was occupied by the Mayflower Coffee Shop, a vastly expanded version of he original small café located on the ground floor of the existing hotel. The basement of the Annex was occupied by a huge laundry which served the original hotel and annex.

After the Great Depression and World War II, the Hilton Hotels Corporation purchased the Mayflower Hotel in December 1946. They owned and operated it for ten years when they acquired the Statler Hotels chain. They were forced to sell the Mayflower when the government filed an anti-trust action against Hilton.

From 1956 to 2015, the Mayflower Hotel was acquired by a variety of owners including the Hotel Corporation of America, May-Wash Associates, Westin Hotels & Resorts, Stouffer Corporation, Renaissance Hotels, Marriott International, Walton Street Capital and the Rockwood Capital Company.

The Mayflower Hotel hosted the Inaugural Ball of President Calvin Coolidge just two weeks after its opening. It hosted an Inaugural Ball every four years until it hosted its final ball in January 1981. President-elect Herbert Hoover established his presidential team offices in the hotel in January1928, and his Vice President, Charles Curtis, lived there in one of the hotel’s residential guest rooms during his four years in office. Louisiana Senator Huey Long also lived at the Mayflower, taking eight suites in the hotel from January 25, 1932, to March 1934. President-elect Franklin D. Roosevelt spent March 2 and 3 in Suites 776 and 781 at the Mayflower Hotel before his inauguration on March 4, 1932.

Two events of significance during World War II happened at the Mayflower. In June 1942, George John Dasch and seven other spies from Nazi Germany entered the United States after being transported to American shores via a submarine. Their goal, named Operation Pastorius, was to engage in sabotage against key U.S. infrastructure. But after encountering a United States Coast Guard patrol moments after landing, Dasch decided the plan was useless. On June 19, 1942, he checked into Room 351 at the Mayflower Hotel and promptly betrayed his comrades. Eighteen months later, a committee of the American Legion met in Room 570 at the Mayflower Hotel from December 15 to 31, 1943, to draft legislation to assist returning military members reintegrate into society. Their proposed legislation, the Servicemen’s Readjustment Act of 1944- known informally as the G.I. Bill- was put into final draft on Mayflower Hotel stationery.

Twice, the Mayflower has been the site where a U.S. presidential campaign was launched, and twice it hosted events which proved to be turning points in a presidential nomination. In March 1931, Franklin D. Roosevelt was vying with Alfred Smith for the Democratic presidential nomination of 1932. John J. Raskob, chair of Democratic National Committee (DNC), opposed Roosevelt’s candidacy. Knowing that Roosevelt had privately committed to repealing Prohibition but had not done so publicly, Raskob attempted to force the DNC, then meeting at the Mayflower Hotel, to adopt a “wet” (or repeal) plank in the party platform. Instead of drawing Roosevelt out, the maneuver deeply offended Southern “dry” (anti-repeal) Democrats who abandoned Smith and threw their support to the allegedly more moderate Roosevelt, and helped him secure the nomination. In 1948, President Harry S. Truman told a cheering audience of Young Democrats of America at a dinner at the Mayflower on May 14 that he intended to seek re-election in 1948. Former Peace Corps and Office of Economic Opportunity director Sargent Shriver announced his run for President of the United States at the Mayflower on September 20, 1975. A more successful campaign began there when Senator Barack Obama locked down the 2008 Democratic nomination for President on June 3, 2008. Hillary Clinton conceded the nomination to Obama on June 7, and introduced Obama to about 300 of her leading contributors at a meeting at the Mayflower on June 26, 2008.

Photo above of Mayflower Hotel by Aaron Siirila in Wikipedia