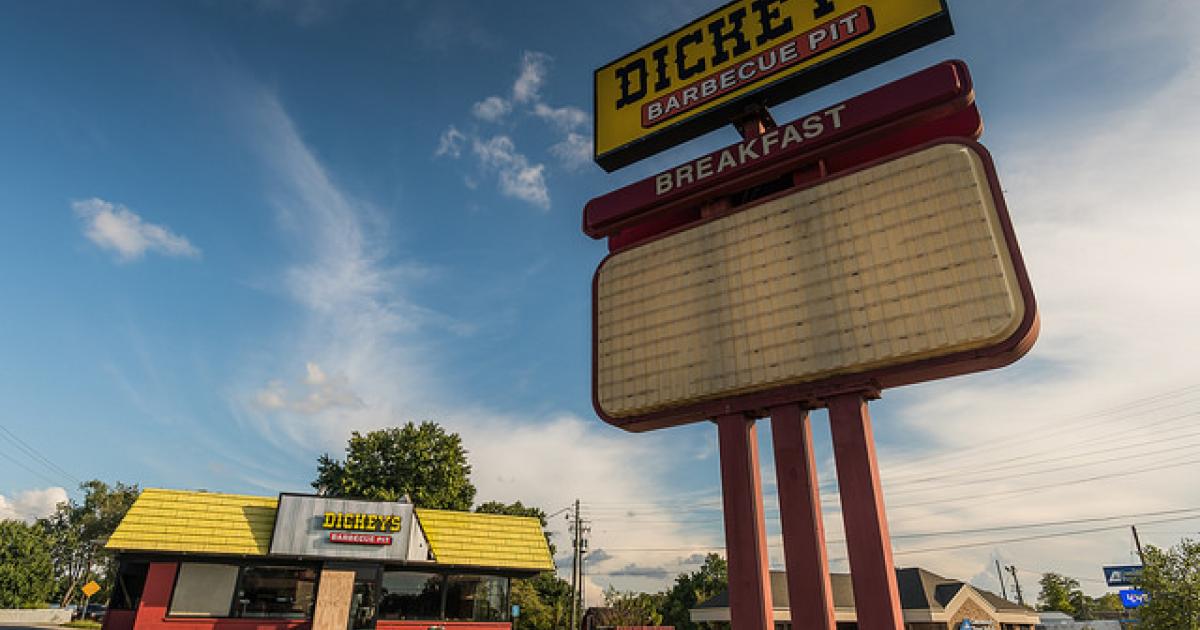 Franchise owners of Dickey’s BBQ are closing at an alarming rate.  Why is this, and can a franchise owner really make a profit owning a Dickey’s BBQ?  Despite this, up to now, the franchisor has continued to sell a high number of new franchises.  Can they continue that pace and keep their financials strong?  And, what is contributing to these conflicting trends?

This article will provide my opinions on this phenomenon.  My previous article, “Is Dickey’s BBQ Franchising’s Next Quizno’s” and Restaurant Business Magazine’s Jonathan Maze’s “Dickey’s Barbeque Pit Closes 113 Units”, started this discussion.

As a review, in Dickey’s BBQ’ Franchise Disclosure Document (FDD) dated September 4, 2018, for the fiscal year ended May 1, 2018, they reported the brand opened 72 new franchised units, but had 89 terminations and 24 ceased operations, for a net store loss of 41 units.  They ended the year with 521 units.  An additional 44 units transferred to new owners. How many of these transfers were selling at pennies on the invested dollar, just to get out from under the liabilities?  The previous year showed 88 units opened, 70 ceased operations, and 67 transfers.  With that level of churn, there are serious unit level issues.

How did so many buy into this investment, at which they would later fail?  Many prospective Dickey’s franchisees were sent a link to a QSR article “2012’s Best Franchise Deals”, which stated, in the first sentence, that the brand had exceeded $800,000 in sales for the average unit. You must assume the number was not higher than this, as Dickey’s would have corrected it.  It must be noted that in the FDD, the franchisor declines to disclose any financial representation data in Item 19.  In fact, I can find no proof that the sales were ever this high, and by using the advertising revenue reported in the FDD, I believe the AUV is in the mid $500,000’s.  How is this not a financial performance representation adopted by Dickey’s which sent franchisees the article?

In addition, some franchisees told me they were sent a sample Profit and Loss spreadsheet, a portion of which is shown below. 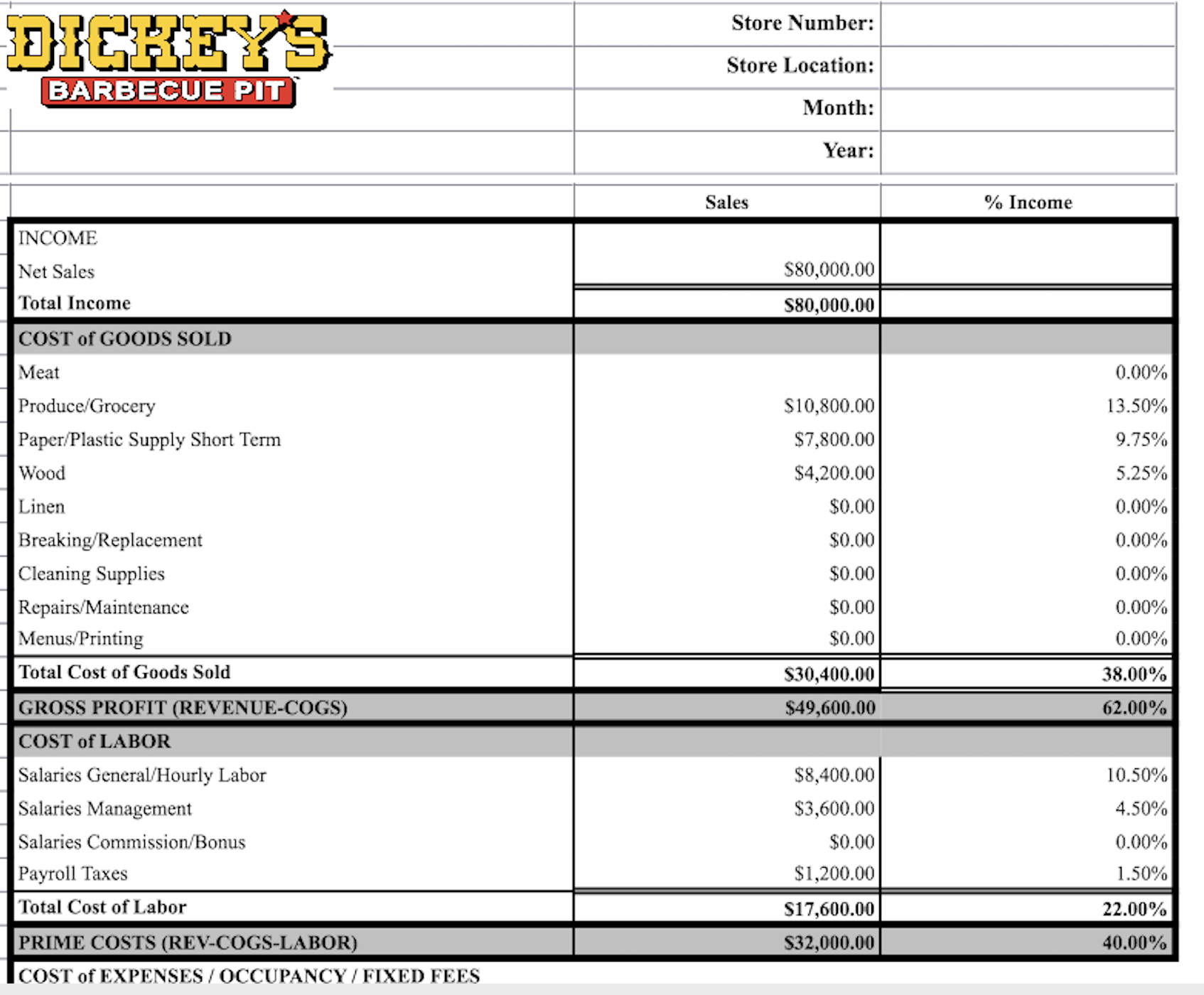 One franchisee was able to produce proof of this by supplying me with an original email sent to him on February 7, 2013, from an individual in the Franchise Development Group, Dickey’s Barbeque Restaurants, Inc.  In the email, the Dickey’s representative states that “This is a sample Only. I am by no means making an earnings claim with this spreadsheet.”  Some may say that 2013 information is too old, but remember those signing a franchise agreement in 2013, would have opened 6-12 months after that, and would be the failures of 2016-2018.  This sample spreadsheet is filled out with sales of $80,000 a month, which is $960,000 per year.

Why would this be so much higher than the annual figure in the QSR story?  Could this be the sales figure needed to qualify for loans, including the minimum debt coverage ratio required for an SBA loan?

What makes this spreadsheet unprofessional is it is not really a usable spreadsheet.  Most numbers are filled in manually, not using formulas as would be normal.  If you change the sales number, none of the costs change, including royalties.  If you look carefully at the sample above, the numbers don’t even add up.  For example, the three items in Cost of Goods Sold are $10,800, $7,800, and $4,200, which adds up to $22,800, but on the spreadsheet the total given is $30,400.  If this was not meant as a disclosure, as the Dickey’s representative claimed, why was it not sent out as a usable spreadsheet where you could change the numbers?  To be usable, a prospective franchisee would want to change sales, and for example, the rent costs they were looking at to see if the business was viable.

Why would Dickey’s send out such a useless tool, unless their purpose was to make a financial performance representation?

Using the sample Profit and Loss spreadsheet, with numbers supplied by the franchisor, the profit would be nearly $200,000 per year, before taxes and without debt service. If that were actually true, the system would not be seeing the 28% churn rate shown in my last article.  However, with prospective franchisees given such “sample” numbers, it’s no wonder why sales of franchises remain high.  Unfortunately, franchisees claim the costs of goods sold are significantly higher than the 38% stated in the sample spreadsheet.  They say occupancy costs tend to be higher than the $4000 per month given.  Items like garbage/grease removal, uniforms, and local marketing, are listed as zero, and there are numerous fees not listed.  The hard reality for most franchisees is that sales are lower than expected, and costs higher, resulting in many losing money and having to close, or keep operating at a loss to avoid being sued for liquidated damages.

To me, the Dickey’s business model seems odd, continually selling new franchises to replace closed units, but seemingly doing little to fix the profit structure so existing franchisees survive.  Unfortunately, buying a franchise has little in common with buying other investments.  In most investments, your risk is the amount you invest.  In franchising, because of the personal guarantees, you risk not only your investment, but every asset you own.  And while you are an investor in the brand, you are not a shareholder where the corporate board of directors would have a fiduciary responsibility to protect your interests.  For the franchise owners, no one has such a responsibility.  In the case of Dickey’s BBQ, though hundreds of franchisees have lost everything, the franchisor’s financials remain strong.  The question remains as to if they can continue this replacement of lost investors/franchisees, and whether the model is sustainable if they can’t.

A few have questioned my motivation on the subject of Dickey’s, and state I hate franchising.  Nothing is further from the truth. I love the franchise business model. I will fight to protect it.  However, I feel too many in the industry have lost their moral compass, and ignore those most at risk, and the largest investors in the industry, the franchise owners.  I will do everything I can to represent and advance the causes of franchise owners, so that their businesses are viable, and their investments are protected.

In this case, I suggest Dickey’s BBQ stop selling franchises immediately, until the business model proves profitable for a large majority of franchise owners.  If they continue their current aggressive sales path, prospective franchisees need to be educated on the realities of success.  Next, I would recommend Dickey’s come to the table with its franchisees, and work towards real solutions that makes franchisees profitable.  Among this would be halting the excessive supply chain mark-ups and fees.  Finally, they need to stop seeking liquidated damages on franchisees who have lost not only their investment, but often all their assets.

If you have been a prospective, current, or past Dickey’s BBQ franchisee and have also been given similar articles or spreadsheets prior to signing a franchise agreement, please contact me at kmiller@franchiseeadvocacy.com.
Photo above of a shuttered Dickey's BBQ by Blue MauMau