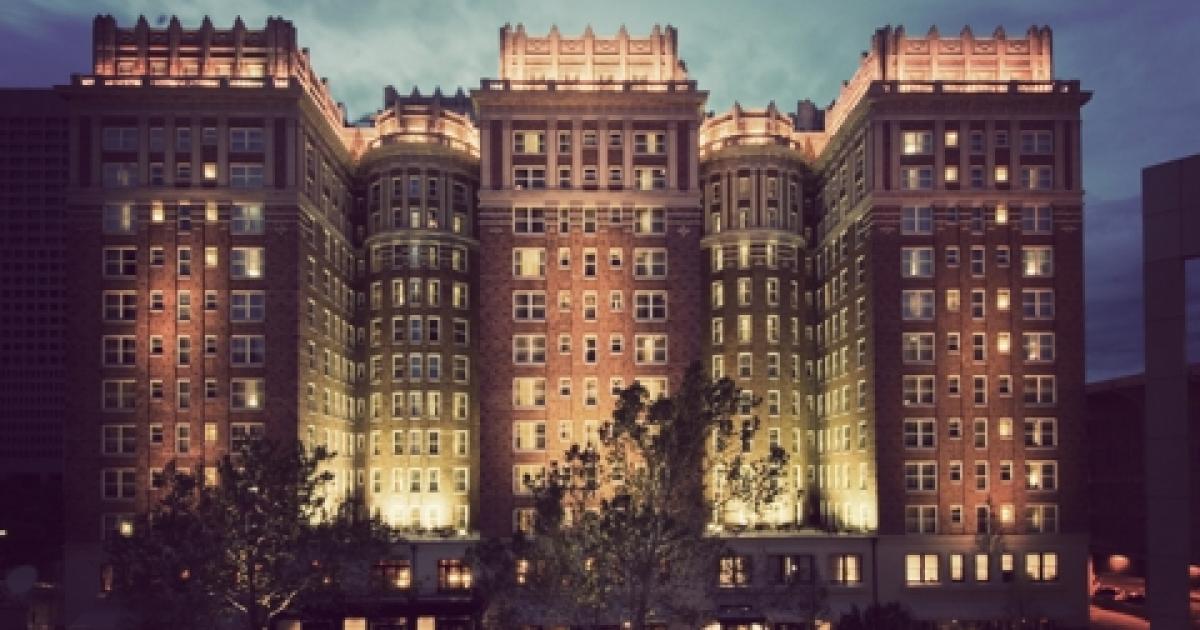 The Skirvin Hilton Hotel is Oklahoma City’s oldest hotel. It was built by William Balser Skirvin, a native of Michigan who made his fortune in Texas land development and oil. In 1906, Skirvin and his family (including his daughter Pearl who would later become Perle Mesta, ambassador to Luxemborg and a famous Washington hostess) moved to Oklahoma City. Skirvin hired Solomon Andrew Layton, an American architect who designed over 100 public buildings in the Oklahoma City area including the Oklahoma State Capitol. Twenty-two of Layton’s buildings are listed on the National Register of Historic Places.

Skirvin and Layton made the hotel as self-sufficient as possible. Skirvin installed a proprietary gas pipeline to the building, dug three wells for water supply, built an electric generating plant and operated an in-house laundry and cooling system.

On September 26, 1911, the ornate Skirvin Hotel was opened for public inspection. Visitors attracted to the 10-story building found two exterior wings, each facing south, and a rounded bay between the wings running the height of the structure. The façade was red brick laid in a Flemish bond pattern, the lower level was faced with limestone, and had two covered entryways. Inside, visitors were greeted with a spacious lobby decorated in English Gothic detail. On the west end of the first floor were the Skirvin Drugstore and other retail shops. On the other wing, customers found the Skirvin Café with a stage for musicians. The café was complemented by the Grill Room in the basement and the Tea Room on the mezzanine.

Entering one of the two electric elevators, guests rose to the upper floors where they found 225 guestrooms and suites. Each room had a private bath, was decorated with velvet carpets and hardwood furniture, and had a telephone connected to the Pioneer Telephone Company lines through a large switchboard located behind the front desk.

Skirvin continued to give the hotel much of his attention, despite the daily presence of his first general manager, Frederick Scherubel. Most days, when he was not attending to his oil interests, Skirvin could be found in the lobby greeting guests or talking with businessmen and politicians. He donated a room to the Republican Party, and welcomed Democrats, so the hotel became a center for politics during the early years of statehood. To be close to his “225-room hobby,” Skirvin moved his family to a five-room suite on the ninth floor. In addition to his three children, the Skirvin household consisted of the kids’ menagerie of dogs, raccoons, hawks, and other animals, which they kept on the roof.

During the next ten years, the guest register of the Skirvin Hotel reflected the frontier character of the young, bustling state. Guests included cigar-chomping politicians, free-wheeling ranchers, blanketed Indians from the state’s 70 tribes, oil-rich millionaires, mud-covered drillers, and even bank robbers such as the notorious Al Jennings, the ex-convict who launched his bid for governor from the lobby. William Skirvin, always impeccably dressed in his well-pressed suit, welcomed all with open arms.

By 1923, the hotel’s success and the continued growth of Oklahoma City convinced Skirvin that expansion was justified. Again, the oilman went to the architect Solomon Layton, who developed plans to add another wing and bay to the east, replacing the one-story garage. In addition, plans called for remodeling all existing rooms, the first of many refurbishings which would improve the hotel each decade thereafter. By 1926, with the investment of $650,000, the hotel had a new wing of 12 stories and two wings with 10 stories each.

In March 1928, as another prosperous era was overtaking Oklahoma City, Skirvin announced plans to raise all wings to 14 stories and to initiate an extensive remodeling of the entire hotel. One year and three months after the first well in the world-famous Oklahoma City oil field was discovered, Skirvin let the first contracts for the renovation. By April 1930, the entire building had been raised to 14 floors with 525 guestrooms, a roof garden, a cabaret club and the old café converted into a modern coffee shop. On the ground level, the lobby was doubled in size with specially-designed Gothic lanterns costing $1,000 each suspended from the ceiling, and hand-carved English fumed oak was added to the walls and doors. Skirvin’s most popular addition proved to be the 14th floor rooftop Venetian Room and Restaurant which was decorated with Italian plaster, a parquet hardwood floor, and more than 100 casement windows for flow-through ventilation. Adjoining it on the east, was a new kitchen, furnished with the most modern appliances.

In the west wing, and connected to the restaurant by a foyer, was the Venetian Room, a supper club featuring live music and dancing. Paneled with American walnut and draped with embroidered mohair, brocatelle and damash, the club was decorated with murals depicting Venetian scenes. The floor was specially designed for dancing with alternate blocks of red and white oak polished to a high sheen.

Oklahoma City was buffeted by the mounting economic depression which began in December of 1929. With his typical boldness, Skirvin announced that he would expand the hotel by building an annex across Broadway. In March of 1931, crews broke ground for the planned 26-level Skirvin Tower, and work continued until January of 1932, when suddenly Skirvin’s resources crumbled. With only 14 floors of the superstructure completed, Skirvin was forced to temporarily abandon the project, a victim of the spreading financial depression.

Early in 1934, Skirvin resumed work on the Tower, but it was not competed until 1938, and even then only a few of the floors were ready for occupants. Described as a “luxury apartment-hotel,” the Tower was linked to the hotel by a tunnel and many of the service employees worked in both buildings. Later owners would finish the interior and operate the Tower as a hotel until 1971, when it was completely remodeled into a glass-enclosed office building. When William Skirvin passed away in 1944, his three children decided to sell the properties.

In May of 1945, only weeks after Germany’s surrender, the hotel and tower were sold for $3 million to Dan W. James, owner of the Black Hotel, another of the City’s six luxury hotels. James brought considerable hotel management skills to the Skirvin, for he had worked in hotels from Louisiana and Arkansas to Texas and Oklahoma. In 1931, he came to Oklahoma City and bought the Black Hotel. When he assumed control of the Skirvin properties, he faced a formidable task, as high traffic, scarce replacement materials, and absent employees had taken a heavy toll during World War II.

To resurrect the quality and elegance of Skirvin, James embarked on a 10-year modernization program. He installed air conditioning for the entire building; he replaced the original entryway canopies with a wrap-around awning; he added a drive-in registry and a parking garage to the north side; and he redecorated all of the meeting rooms on the east side of the mezzanine. James invested even more in the Tower, where he remodeled the Persian Room, created the Tower Club, and refinished many of the luxury apartments and suites. James realized that a luxury hotel could not succeed in the 1940s without offering a wide range of services to the public. He made every effort to provide room service, in-by-nine-out-by-five guest laundry, a stenographer and notary, a beauty shop, a barber shop, and a house physician.

James instituted several programs to insure good employee relations and maximum effort. He created an 8-page in-house magazine, Inn-Side Stuff, which carried news about employees, contests for efficient service, and information about other divisions of the hotel. James also introduced employee benefit programs such as company-paid insurance policies for longtime workers and annual Christmas dinners for all staff members and their families.

Such policies made the Skirvin one of the most successful hotels in the Southwest, an important role in a city, which was third only to New York and Chicago in the number of conventions attracted each year. This status was enhanced during the post-war years by the presidential visits of Harry Truman and by Dwight D. Eisenhower. Both events helped establish the Skirvin as the queen of hotels in Oklahoma City.