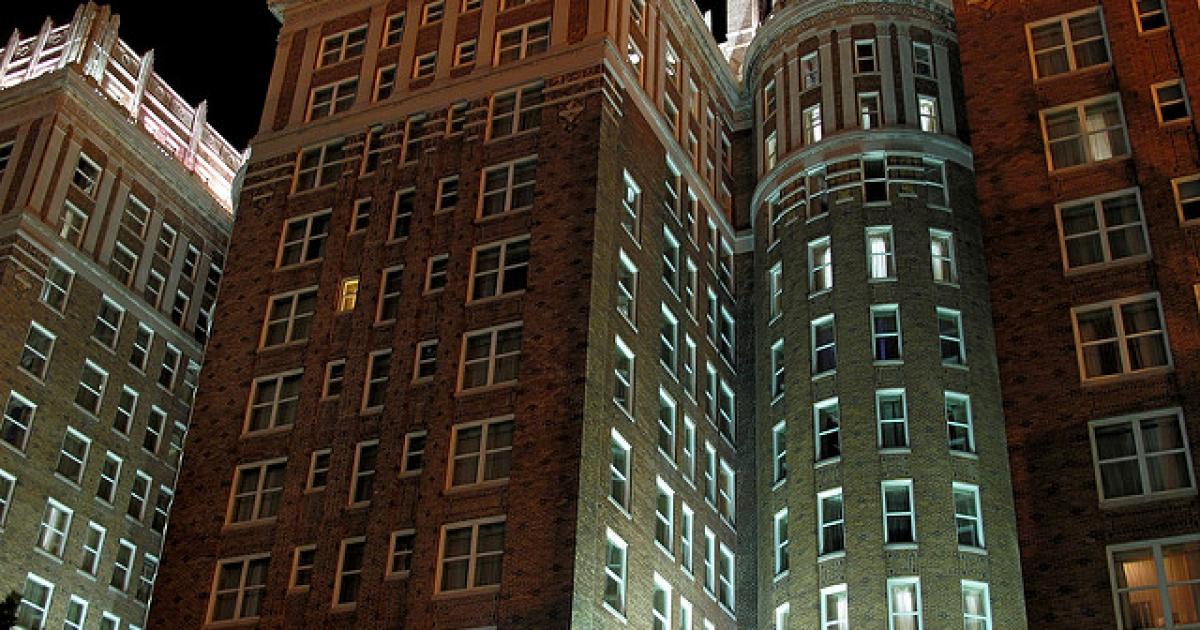 Hotel owner Dan W. James, like Bill Skirvin before him, did not rest on past accomplishments. In 1959, a swimming pool was added to the north side of the hotel, and one year later he built the Four Seasons Lounge next to the pool. Despite such attempts to modernize his properties, James and other hotel operators were confronting the decline of the central city. Beginning in 1959, new suburban shopping malls were built every few years, drawing shoppers away from downtown. Another factor in the central city’s decline was the new age of motor car transportation, which shifted emphasis from railroads and streetcars to busses and automobiles. City streets, designed for pedestrian traffic and only limited motor use, were too congested for heavy traffic, while limited space impeded convenient parking.

In 1963, just as the problems confronting downtown Oklahoma City were mounting, James announced that he had sold the Skirvin to a group of investors from Chicago. Although this partnership added a $250,000 banquet room to the hotel and made grand plans for the development of both the Skirvin Hotel and Tower, they sold the properties to H.T. Griffin in 1968.

Griffin, who planned to build the proposed Liberty Tower just to the south of the hotel, unveiled a two-year plan intended to rejuvenate the Skirvin and reverse the exodus from downtown Oklahoma City. With an investment of $2.5 million, he redecorated the Sun Suite, added a new restaurant, replaced all the window sashes with bronze-colored frames, replaced all the furniture, added color television sets to each room, and remodeled the lobby, kitchen and coffee shop.

Despite this massive investment, Griffin encountered difficulties. Urban renewal construction was active during the late 1960s, further congesting traffic and discouraging movement downtown. Occupancy rates declined, reaching a nadir of only 32 percent in 1969, a period when an occupancy of 70 percent was necessary to pay operating expenses and outstanding bank loans. In 1968, the hotel made a small profit, but in 1969 and again in 1971 the Skirvin suffered losses. Combined with heavy investment in Liberty Tower, the negative cash flow forced the Griffin into bankruptcy in late 1971.

At this low point in its celebrated history, the Skirvin was placed in the hands of a trustee, Stanton L. Young, who borrowed money for operations and searched for a way to pay off debts and return the hotel to its former grandeur. One year later, Young negotiated to sell the Skirvin Hotel to CLE Corporation, a Texas firm that already owned and managed a chain of hotels across the nation. Purchase price was approximately $2 million.

In late 1972, the new owner announced that the name of the hotel would be changed to “Skirvin Plaza Hotel” and pledged to invest $2.3 million in a general remodeling campaign – a figure which would increase to $8 million by 1974. Much of the work was exterior facelifting, such as repointing mortar, cleaning bricks, and replacing old awnings. Every guest room was gutted and redecorated in one of eight different styles and all new plumbing and electrical wiring was installed.

Suffering from sagging occupancy despite their investments, CLE Corporation in 1977 sold the Skirvin to the Businessman’s Assurance Company. The City’s other fine hotels, such as Huckins, Biltmore, Tower and Black, already had been abandoned, demolished, or converted to office space.

The life of the Skirvin, hanging in the balance for the past 16 years, received a new chance in 1979 when a small group of investors recognized the latent potential of the hotel. With a faith reminiscent of Bill Skirvin, the new investors purchased the hotel for a reported $5.6 million. With the combined resources and talent of investors Ron Burks, Bill Jennings, John Kilpatrick, Jr., Bob Lammerts, Jerry Richardson, Dub Ross and Joe Dann Trigg, the Skirvin Plaza Investors approached their new challenge aggressively.

With a $1 million commitment, the investors undertook an extensive remodeling campaign. In the lobby, workers removed an added staircase in order to regain the openness of the original design. Then, while demolishing other additions, workers found an original wooden archway, which served as a pattern for the design of other arches and wood trim. Above the refurbished walls, ceiling murals were recreated and massive chandeliers imported from Czechoslovakia were installed. The Skirvin, after suffering two decades of decline, was to get another chance.

In 1980, the future of the Skirvin seemed assured. The interior renovation was nearly completed and events were unfolding around the Skirvin that would attract new visitors. Urban renewal, which had slowed during the mid-1970s, gained new momentum when a developer from Dallas began work on the Galleria, the long-promised retail and office complex just a block west and south of the Skirvin.

Another remarkable new development downtown was the preservation of several of the City’s foremost historic buildings. Spurred by mounting prosperity, tax incentives, and the growing demand for office space, investors purchased and renovated structures such as the Colcord Hotel, the Harbour-Longmire, the Black Hotel, Montgomery Ward, and the Oil and Gas Building. This facelifting injected new life into the central city.

The significance of the Skirvin Hotel in the history of Oklahoma was officially recognized late in 1980 when two plaques were unveiled by Governor George Nigh. One plaque designated the inclusion of the hotel on the National Register of Historic Places; the other marked a similar honor from the Oklahoma City Historic Preservation and Landmark Commission.

Nevertheless, the Skirvin skidded into bankruptcy and closed down in 1988 and sat empty until 2007 when it was acquired by Marcus Hotels and Resorts who undertook a $55 million renovation. On its 100th birthday, the hotel reopened as the Skirvin Hilton Hotel and has earned a AAA Four Diamond rating every year since.

“We are delighted to celebrate the 100th anniversary of the oldest existing hotel in the state of Oklahoma. The Skirvin Hilton is a grand hotel in the tradition of historic hotels, and was our fourth historic restoration,” said Bill Otto, president of Marcus Hotels & Resorts. “While carefully retaining its historic details, we completely renovated the property and introduced successful restaurant concepts, including the Park Avenue Grill and Red Piano Bar. We are proud to be a part of this celebratory event – and proud to continue to deliver exceptional service to our Oklahoma City guests.”

The project leveraged Marcus Hotels’ 50 years of experience in restoring landmark hotels. Martin Van Der Laan, general manager said, “The Skirvin Hilton has been considered the city’s crown jewel through the turbulent years and rebirth of downtown Oklahoma City in 2006. Today the hotel serves as a chronicler of the city’s history and remains an important piece of the city’s past and future”.

The Skirvin Hilton Hotel is a member of the Historic Hotels of America, the official program of the National Trust for Historic Preservation.