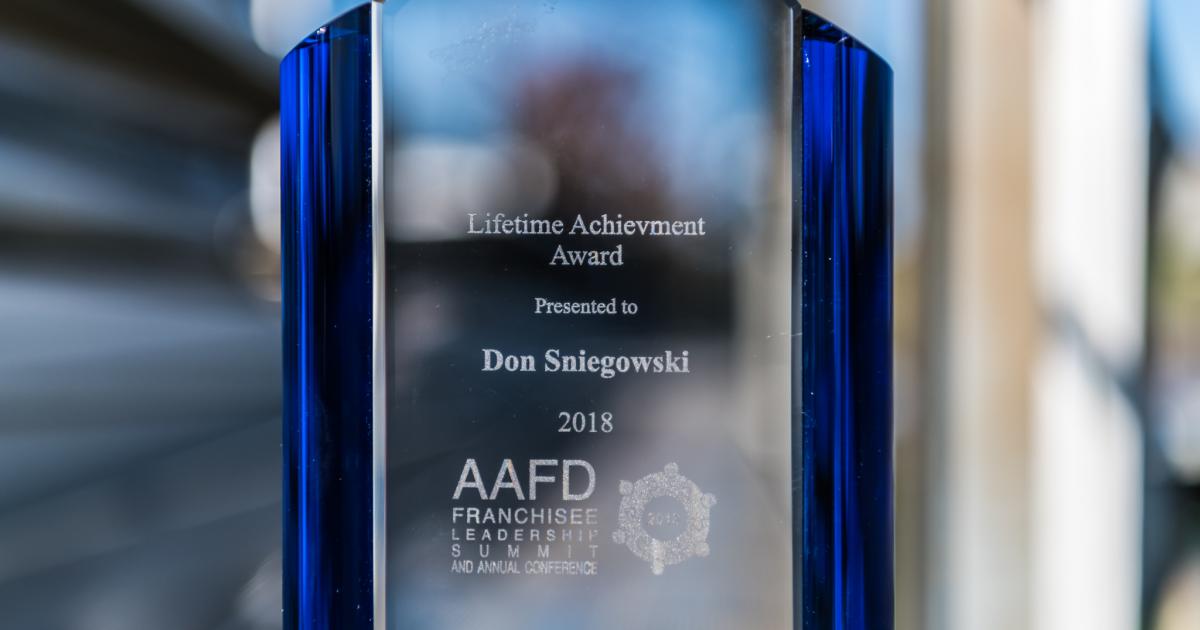 On the evening of October 23, the American Association of Franchisees and Dealers (AAFD) awarded Don Sniegowski, Blue MauMau publisher, its Lifetime Achievement Award.

Each year the association of franchise owners, which is now over a quarter of a century old, gives out what it states is "its most prestigious annual recognition of individuals whose lifetime body of effort has benefitted the franchising community."

As the founder of "the franchise owner's most trusted news site,” Sniegowski was presented with the Lifetime Achievement Award by Robert Purvin, chairman of the AAFD.

Purvin stated, “Don’s creation, Blue MauMau, was built upon a passionate mission to bring truth to the public about franchising for the benefit of franchisees and would-be investors and to promote a franchise community in which all stakeholders with an investment in franchising have both the right and opportunity to succeed. Bluemaumau.org embraces a proud history of independent journalism married to today’s widening culture of social media to bring critical news, facts, praise and complaints about the trillion-dollar industry we call franchising.”

"I am deeply grateful," Sniegowski said in his acceptance speech. Sniegowski explained to the audience of franchise owners, "The aim of Blue MauMau is to be the franchise owner’s most trusted news source. As the first of its kind, the content platform was constructed and the news reported with solely franchisees in mind. The site works best when franchise owners add to reported news stories, posting their own comments and insights on Blue MauMau. A franchisee can preserve their anonymity, if they wish, by registering under a pen name."

Don Sniegowski has received the following awards for his contributions in building an online news outlet as well as reporting news and information to franchise owners:

A few minutes before Sniegowski received his award, Miami-based franchise attorney Robert Zarco accepted the AAFD's 2018 Chairman Award for his work in expanding good faith and fair dealing in his multi-million dollar win of franchisee Bryman v. El Pollo Loco. Zarco was already well known among franchise lawyers for his landmark case of Scheck v. Burger King that moved the good faith and fair dealing bar in 1992. The industry is watching to see if the Bryman ruling sticks, particularly if it wins on appeal.

Immediately before Sniegowski received his award, Zarco said a few words about the need for Blue MauMau and Sniegowski's contributions to inform franchise owners.

This week marks 13 years since the official launch of Blue MauMau.

Congratulations and well deserved.  Blue MauMau is a one of a kind site for franchise owners.  As you launch BMM 2.0, franchise owners need to become more engaged than ever.  While the "Lifetime Achievement" is deserved, make sure its not the end, but a new beginning.  Here's to your AAFD award and many more to come!