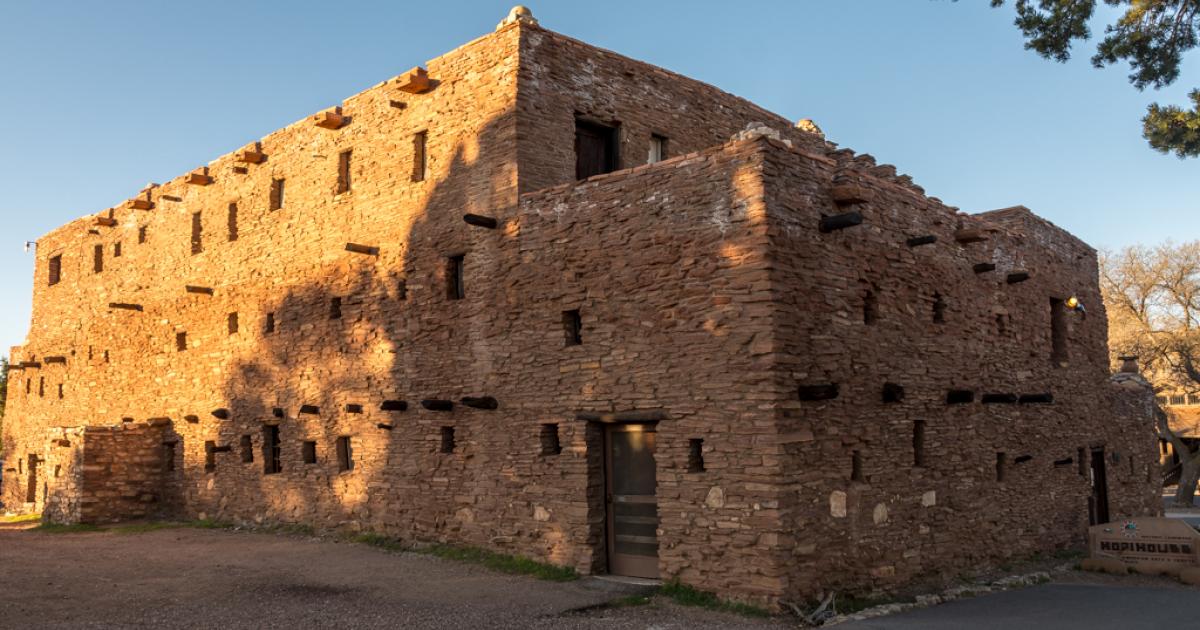 A pioneering American woman architect and interior designer whose distinct architectural knowledge was steeped in the culture and landscape of the Southwest. As the architectural historian for the Fred Harvey Company, she designed hotels, restaurants, gift shops and rest areas along the major routes of the Atchison, Topeka and Sante Fe Railway from 1902 until her retirement in 1948. Yet few of the nearly five million people who visit the Grand Canyon National Park every year are aware of Mary Colter and her accomplishments. No wonder she’s been called “the best-known unknown architect in the national parks.”

Born on April 4, 1869 in Pittsburgh, Pennsylvania, she was the daughter of Irish immigrants William Colter, a merchant, and Rebecca Crozier, a milliner. She experienced a transient childhood moving with her family from Pennsylvania to Texas and Colorado before finally settling down in Saint Paul, Minnesota at the age of eleven. In 1880, Saint Paul had a population of 40,000 people and a large minority of Sioux Indians, survivors of the Dakota War of 1862 which forced many to leave the newly-formed state.

Mary Colter graduated from high school at the age of 14 and after her father died she attended the California School of Design (now the San Francisco Art Institute) until 1891 where she studied art and design. Established by the San Francisco Art Association in 1874, the California School of Design, one of the first art schools in the West, provided its students with a comprehensive art education. For fifteen years Colter taught drawing at Mechanic Arts High School and lectured at the University of Minnesota Extension School. Her first design commission came when she met Minnie Harvey Huckel, daughter of the founder of the Fred Harvey Company.

In 1902, Colter started working for the Fred Harvey Company as an interior designer and practical architect. Her first assignment was to create an interior design for the Harvey Company’s newest project: the Indian Building adjacent to Harvey’s Hotel Alvarado in Albuquerque, New Mexico. The Alvarado was designed by architect Charles Frederick Whittlesey (1867-1941) who trained in the Chicago office of Louis Sullivan. In 1900, at the age of thirty-three, Whittlesey was appointed Chief Architect for the Atchison, Topeka and Santa Fe Railway. He designed the El Tovar Hotel at the south rim of the Grand Canyon in Arizona and the Alvarado Hotel in Albuquerque with eighty-eight guestrooms, parlors, a barbershop, reading room and restaurant. 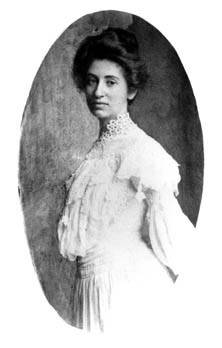 Mary Colter’s design for the adjacent Indian Building helped to launch the Harvey Company’s long-time sponsorship of Indian arts and crafts. The Albuquerque Journal Democrat reported on May 11, 1902 that the Alvarado Hotel “opened in a burst of rhetoric, a flow of red carpet and the glow of myriad brilliant electric lights with hopes that it would attract the wealthier classes to stop in Albuquerque on their travels to the West.”

Mary Colter’s Indian Building contained work and exhibit rooms with Indian basketmakers, silversmiths, potters and weavers at work. It launched the Harvey Company’s long-standing sponsorship of Indian arts and crafts. Mary Colter designed a new cocktail lounge in 1940 in the Alvarado and named it La Cocina Cantina to capture the design of an early Spanish kitchen.

From 1902 through 1948, Mary Colter served as the primary designer for the Fred Harvey Company, completing designs for twenty-one hotels, restaurants, lounges, curio shops, lobbies and rest areas along the major routes of the Atchison, Topeka and Sante Fe Railway. She captured the romance and mystery of the American Southwest and Native American artistic culture. Some characteristic features of her designs were tiny windows allowing shafts of light to accent red sandstone walls; a low ceiling of saplings and twigs resting on peeled log beams; a hacienda enclosing an intimate courtyard; a rough boulder structure, built into the earth as if part of a natural rock formation. These details shaped American visions of the Southwest for generations to come.

All twenty-one of Colter’s projects reveal her acute understanding of and commitment to both the natural and cultural landscape in which she worked. Through her interior designs, Colter demonstrated a spirited irreverence in her compositions, offering a clever demonstration of her own inventive Arts and Crafts sensibility.

Meanwhile, in the projects she termed “re-creations,” such as the Hopi House (1905; photograph above) and Desert View Watchtower (1933; photograph below) in Grand Canyon National Park, she almost always followed the architectural features of the original prototypes.

Employing indigenous Native American builders, demanding the use of local materials when possible, and attending to minute historical details obtained through research expeditions to various Indian historical ruins, Colter strove for stylistic verisimilitude without attempting to make, as she put it, a “copy,” or a “replica.”

In her smaller-scaled tourist architecture at the Grand Canyon, Colter introduced more innovative designs, including those for Hermit’s Rest and Lookout Studio (both 1914), places for Canyon visitors to stop that were intended to be “hidden under the rim,” according to Colter.

In Lookout Studio, she created a single-level, horizontal structure of rusticated Kaibab limestone that mimicked the stratification of the eroded rock below, ensuring unobstructed views from other promontories by means of architectural camouflage which allowed the innate drama of the Grand Canyon to enrich tourists’ experiences. 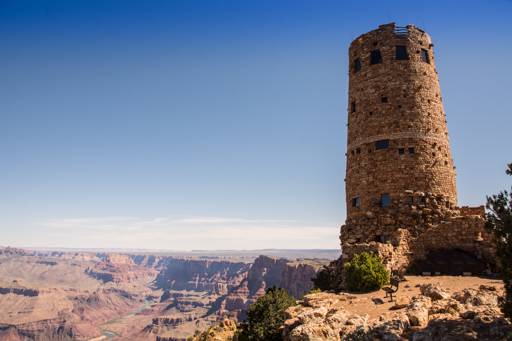 Other Harvey projects drew Colter away from the Grand Canyon, giving her the opportunity to design station-hotels along the Sante Fe Railway line, through which her architectural vision could manifest at a great scale. Of the El Navajo Hotel in Gallup, New Mexico (1923), she wrote, “I have always longed to carry out the true Indian idea, to plan a hotel strictly Indian with none of the conventional modern motifs,” probably referring to the ersatz Native Americana common to so many of the inferior hotels arising in the Southwest after World War I. Both the El Navajo in Gallup, New Mexico and La Posada in Winslow, Arizona, demonstrated Colter’s engagement with regional design issues and evoked the originality and wit of her earlier projects.

Colter retired to Santa Fe in 1948 and died there in 1958. Frank Waters, the great historian and expert on Native Americans of the Southwest, in his book Masked Gods: Navaho and Pueblo Ceremonialism (1950), recalled Mary Jane Colter:

“For years, an incomprehensible woman in pants, she rode horseback through the Four Corners making sketches of prehistoric ruins, studying details of construction, the composition of globes and washes. She could teach masons how to lay adobe bricks and plasters how to mix washes.”

Although her contemporaries often called her a “decorator,” her projects, of which four– Hopi House, Hermit’s Rest, Lookout Studio, and Desert View Watchtower – have been designated National Historic Landmarks, suggest that “architect” would be a more accurate and enduring description.

In early 2018, a book entitled False Architect: The Mary Colter Hoax by Fred Shaw stated that Colter was never trained or certified as an architect. It claimed that she falsely took credit for designs produced by others.

In response to this provocative thesis, Allan Affeldt, co-owner and operator of the La Posado Hotel, Winslow, Arizona wrote in September 2018: “All of us in the Harvey world are quite upset about the book. Shaw is clearly a misogynist.” Affeldt added:

“The attributions of Colter’s works to Curtis and others is preposterous, and obviously discounted by the many including Harvey family with direct knowledge of Colter and the buildings. We have collectively decided it best to ignore these self published rantings and not give Shaw a podium for his hatred.”

My hotel history column “The Negro Motorist Green Book” told the story of a series of AAA-like guides for black travelers published from 1936 through 1966. It listed hotels, motels, service stations, boarding houses, restaurants, beauty and barber shops which were relatively friendly to African Americans. Now the newly-released movie “Green Book” tells the story of Don Shirley, a Jamaican-American classically trained pianist and his white chauffeur, Frank “Tony Lip” Vallelonga who embark on a 1962 concert tour through the segregated Deep South. Despite the movie’s title, there are only a few references to the actual Green Book travel guide. But the movie is excellent and entirely worth seeing.