The Americana of New York 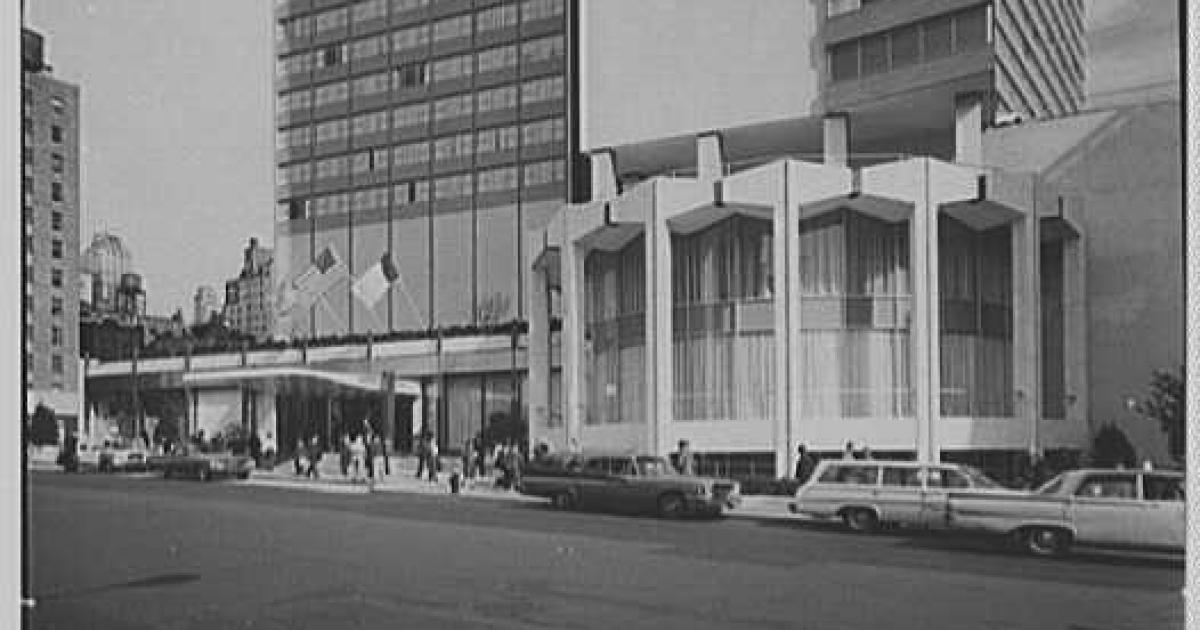 The Americana of New York opened on September 25, 1962 as a 2,000-room convention hotel. It was constructed by brothers Laurence Tisch and Preston Tisch, co-owners of the Loews Corporation and was the first over 1,000-room hotel to be built in New York since the Waldorf Astoria in 1931. With 51 floors, it was acclaimed for many years in its advertising and by the media as the tallest hotel in the world, based on the number and height of its inhabited floors. The Americana was built, along with the New York Hilton facing Sixth Avenue on the next block, to serve the huge number of tourists that the 1964 New York World’s Fair would bring, as well as the business and convention market. The hotel was also known in later years as the Americana Hotel, Americana New York and Loews Americana of New York.

The hotel was built to the designs of architect Morris Lapidus with a two-story podium originally containing the lobby, five restaurants, ten ballrooms, a large convention hall, and “an acre of kitchens”, with the hotel rooms in narrow slabs above. To achieve this, Lapidus employed three structural systems: floors 1 through 5 are steel-concrete composite columns, floors 5 through 29 are concrete shear walls, and 29 to 51 reinforced concrete columns. At the time of its completion, the building was the tallest concrete-framed structure in the city.

On July 21, 1972, American Airlines leased the Americana of New York from Loews, as well as the City Squire Motor Inn across the street, and the Americana Hotels in Bal Harbour, Florida, and San Juan, Puerto Rico, for a period of thirty years. American merged the hotels with their existing Sky Chefs Hotels chain, and marketed all the properties under the Americana Hotels brand. The hotel served as Democratic headquarters for the 1976 Democratic National Convention and 1980 Democratic National Convention. The hotel also hosted the 1974 NFL Draft.

The Americana of New York and the City Squire Motor Inn were sold to a partnership of Sheraton Hotels and the Equitable Life Assurance Society on January 24, 1979. The Americana was renamed the Sheraton Centre Hotel & Towers. Sheraton bought out Equitable’s share in the hotel in 1990, freeing them to undertake a nearly $200 million renovation in 1991, when the hotel was renamed the Sheraton New York Hotel and Towers. Following the World Trade Center attacks of September 11, 2001, Lehman Brothers Investment Banking division temporarily converted the first-floor lounges, restaurants, and 665 guestrooms of the hotel into office space. Starwood Hotels (which had bought Sheraton in 1998) sold the hotel, along with 37 other properties, to Host Marriott for $4 Billion on November 14, 2005. The hotel continued to be managed by Sheraton, however, and was again renovated from 2011-2012, at a cost of $180 million, with the name shortened to Sheraton New York Hotel in 2012 and then changed to Sheraton New York Times Square Hotel in 2013.

The main block of accommodation is a tall thin bent slab form, angled towards the 52nd Street corner, emphasized by the horizontal striped façade of strip windows and yellow glazed brick spandrels. On the north side facing Sixth Avenue, a lower 25-story wing is placed at right angles to the bent slab, and so at a slight angle to the street, and includes the entrance and lobby in a two-story podium.

The dominant feature at ground level is the two story circular rotunda projecting from under the end of the bent wing on the 52nd street corner. An image of the original hotel in the 1960s can be found in the collection of the Museum of the City of New York. The sidewalk on all sides originally had striped paving at the slight angle of the entry and bent wing, effectively turning the Seventh Avenue sidewalk into a forecourt for the hotel.

The facades of the accommodation blocks are generally intact, but the podium levels were reclad in the 1991 renovation, replacing the varied, light 1960s details with Postmodern squared granite.

Disclosure:
I once worked as Resident Manager of the Americana of New York. I lived on the 45th floor and was available at any hour of the night for any and all out-of-the-ordinary events. Inevitably, there were incidents that arose out of mechanical failures, unexpected guest behavior and/or employee shortcomings. I loved the excitement of the job and reported to General Manager Tom Troy, a veteran of the Statler Hotel Corporation.