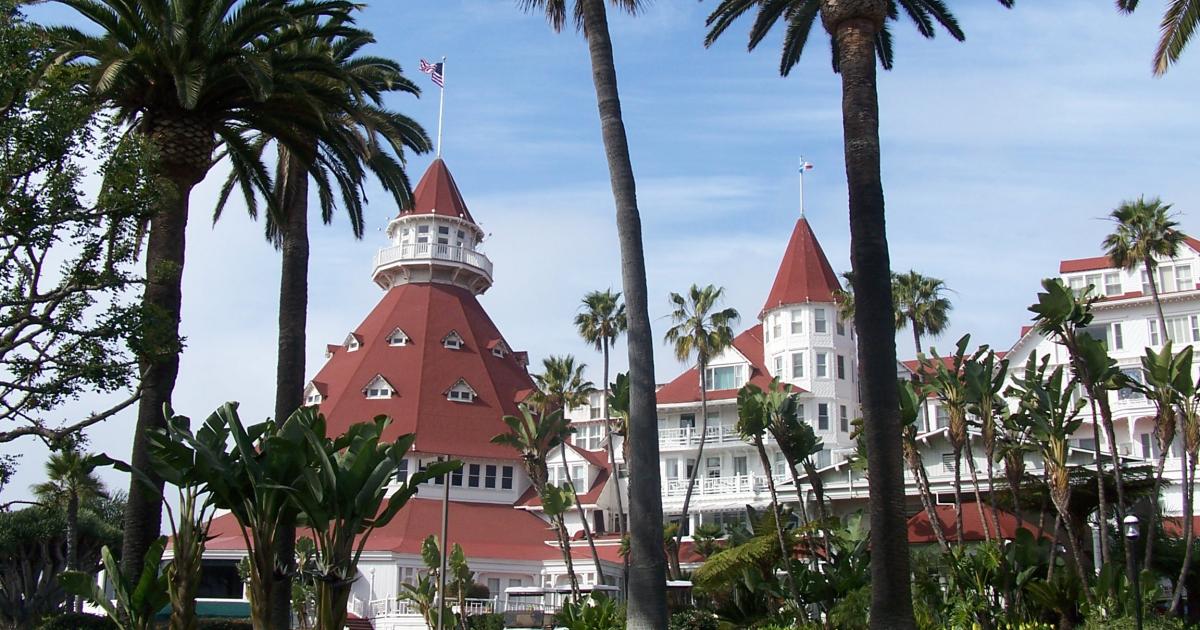 The renowned Hotel del Coronado is a grand example of elegant Victorian architecture providing one of the most beautiful and popular beach resorts in the United States.

The Del was conceived by two mid-western businessmen, Elisha Babcock, Jr. and Hampton L. Story who bought the entire undeveloped 4,100 acres on the peninsula of Coronado for $110,000. Babcock was a retired railroad executive from Evansville, Indiana and Story the owner of the Story & Clark Piano Company in Chicago.

Babcock and Story hired the architectural firm of Reid & Reid consisting of James W. Reid (1851-1943), Merrit J. Reid (1855-1932) and Watson E. Reid (1858-1944) who were based in Evansville, Indiana. Upon arriving in Coronado, James Reid said, “The next day, such a one as may be found only in Coronado in December, we all visited the beach. No finer location could have been found anywhere.”

Construction commenced in March 1887 with many unskilled Chinese workers who had to be trained on the job by master carpenters, plumbers and other craftsmen from San Francisco and Oakland. Babcock ultimately found enough workers to man the construction site twenty-four hours a day.

The shortage of lumber was solved with contracts for exclusive rights to all the raw lumber production of the Dolbeer & Carson Lumber Company of Eureka, California. Reid built planing mills, kilns, a metal shop and iron works on the site. To speed construction, Reid also installed water tanks, gravity flow sprinklers, two giant cisterns to store rainwater and the first oil furnace in a new hotel. The Mather Electric Company installed electric lighting, a world first. Bricks were fired in a kiln built nearby specifically for the project and rock from quarries in Temecula Canyon was provided by the San Diego Granite Company. Meanwhile, toilet seats were ordered from England, china from France, glassware from Belgium, 21,000 yards of carpet from Lowell, Massachusetts and wooden chairs from a furniture manufacturer in Boston. The hotel’s first general manager, John B. Seghere, had to double as an interior decorator.

The original five-story structure remains intact and in full use along with two newer sections closer to the beach. The Crown Room is still regarded as one of the world’s monumental architectural structures with its high sugar pine ceiling held together only with wooden pegs. There are no nails or interior supports and for many years was considered the largest column-free room in the United States.

After brief periods of ownership by Robert A. Nordblom, Kansas City hotelier Barney Goodman and San Diego businessman John S. Alessio, Chicago-born M. Larry Lawrence became the owner in 1963. For the next twenty years, $40 million was spent repairing and replacing plumbing, electrical, heating, ventilation and cooking gas lines. Because the Del is the world’s largest wooden structure, Lawrence installed one of the most expensive Grinnell sprinkler systems to provide the utmost in fire safety. He also constructed the Grande Hall Convention Center to make the Del one of Southern California’s largest and most successful meeting and convention venues. The hotel is almost completely self-contained with the following back-of-the-house amenities: butcher shop, pastry bakery, upholstery and furniture shops; electrical, plumbing, machine shops; an in-house laundry and dry cleaning facility.

Lawrence was highly respected for his self-made financial success, but no accomplishment was more dear to him than his restoration of one of the world’s most beautiful historic landmarks, the grand dame of American seaside resorts – the Hotel del Coronado.

While the Del has been the location for many movies, perhaps the most famous was Some Like It Hot (1959), starring Marilyn Monroe, Jack Lemmon and Tony Curtis.

The Hotel del Coronado was added to the National Register of Historic Places in 1971 and was designated a National Historic Landmark in 1977.

In March 2016, Blackstone sold Strategic Hotels & Resorts to Anbang Insurance Group, a Beijing-based Chinese insurance company, in a $6.5 billion deal involving 16 luxury American hotel properties including the Hotel del Coronado. Fifteen of the sixteen were immediately transferred to Anbang. However, the sale of the Hotel del Coronado was held up because of concerns expressed by the federal inter-agency Committee on Foreign Investment in the United States, which reviews acquisitions of U.S. businesses by foreign investors for possible national security risks. The agency was concerned about the hotel’s proximity to major Navy bases in San Diego. In October 2016 it was reported that the deal had fallen through and the hotel would remain in Blackstone’s ownership.

In August 2017, Hilton Hotels and Resorts took over the management of Hotel del Coronado as part of their Curio Collection.

*excerpted from my book “Built To Last: 100+ Year-Old Hotels West of the Mississippi” AuthorHouse 2017

Photo of the front view of the Hotel del Coronado by Nehrams2020 at Wikipedia,CC BY-SA 3.0