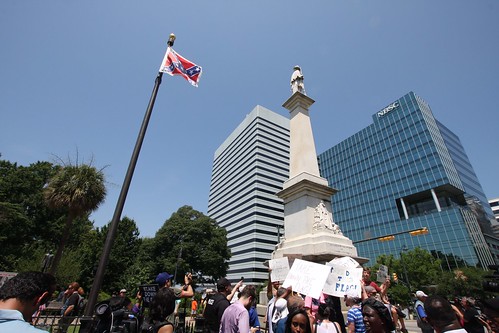 Heeding Governor Nikki Haley's call after the wake of last week's church killings in South Carolina, state lawmakers have proposed a bill for the removal of the Confederate flag that flies above statehouse grounds.

National retailers have also joined in. Wal-mart, Amazon, Sears Holdings Corp, eBay, Valley Forge Flag Co.,and others have announced that they will no longer sell Confederate flags and flagged paraphernalia.

However, The Wall Street Journal reports that not all merchants are on the band wagon.

…Anna Robb, a franchise owner for Dixie Outfitters, a clothing retailer that sells what it calls "Southern Heritage" designs, said the news is boosting sales at her Branson, Mo., store. Since the shooting, she said, customers have remarked to her that the media and government are looking for someone or something to blame.