Arby's Venison Sandwiches May Sell Out within Minutes 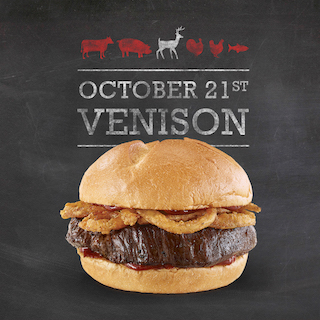 There are hints that the eagerly anticipated venison steak sandwiches that Arby's will offer on Saturday, October 21, will sell out within minutes. According to Tulsa World, some of the city's Arby's will have 50 sandwiches, others will have 100.

“As you can imagine, it’s difficult to source a venison supplier for 3,300 Arby’s restaurants and be able to sell venison on the open market for a limited time. It’s just not sustainable,” said Fred Fleischner, spokesman for Tulsa-based U.S. Beef Corp., Arby’s largest franchisee.

“If you’re one of the first in line at 10 a.m. when we open, you’ll be able to be one of the lucky ones in Tulsa to get their very own venison sandwich without having to sit up in a tree for some time waiting on the hunt.” — Mike Averill, Tulsa World

The venison is from red tailed deer farm-raised in New Zealand and will sell for $7, up from the $5 it sold for last year when it was available in just 17 Arby's restaurants, according to Bret Thorn at Nation's Restaurant News.