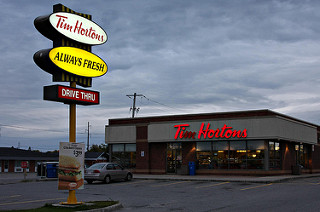 “To be clear, a small group of dissident franchisees who have been the driving force behind negative media coverage does not represent the voice of the whole franchise system or of the company,” Mr. Schwartz said.

“Unfortunately, this continued media coverage has negatively impacted our guests’ [customers’] perception of our brand and our community roots.” — Marina Strauss, The Globe and Mail

But the Great White North Franchisee Association, an independent organization of Tim Horton franchisees, refuted this “small group” label back on October 20, 2017, saying over 50 percent of the Canadian chain were members:

We are certainly not just a ‘rogue group of franchisees’, or ‘a small group of disgruntled store owners’ that RBI would have you believe. We have grown into a solid and vibrant group of store owners who want to take their destiny into their own hands. Half of the chain has demonstrated that they believe in the accomplishments we have already made, and support the significant issues that we are continually bringing to light as we move forward. — GWNFA website

GWNFA board member Mark Kuziora was denied renewal earlier this month by the franchisor for one of his two Tim Hortons restaurants, a move widely suspected to be retaliation for his active role in the franchisee association.