The Real Story of Smashburger

"Home of the Smashburger" restaurants invented in Kentucky 50 years ago.

PIKEVILLE, Ky. — Smashburger’s origin dates back over fifty years ago in Ashland, Kentucky, located in the Appalachian Mountains.

The story is that the original Dairy Cheer hamburger shop owner Bill Culvertson, created the “smashburger” when a worker discovered that smashing the meat with a No. 10 bean can while grilling was a great way to get the best flavor into a burger.

Out of that cooking method Smashburger was born.

Culvertson’s restaurant had originally been a Dairy Queen. When the corporate office refused to let him sell hot dogs and hamburgers, he terminated his franchise and operated independently as Dairy Cheer. Bob Borders, former owner of a Pikeville Dairy Cheer for twenty-one years and now retired, said Culvertson eventually sold his business to Lou Compton, a woman in Pikeville who saw an opportunity to franchise the business.

Chris Smith, a current owner of a Pikeville restaurant, located not far from where country singer Loretta Lynn was born, bought the business from Borders in the mid-1990s.

“When Lou first started her husband at that time, a driver for the coal mines, told her with their great food she could run the stores and sell the rights to other people to operate Dairy Cheers,” explains Smith. He said Compton opened a number of franchised restaurants using the familiar “Home of the Smashburger” trademark. And, until recently, she had owned it for thirty-five years collecting royalties.

At one point, Compton had restaurants in Carlisle, West Liberty, Lawrenceburg, Prestonburg, as well as other Kentucky towns, but today many of them are closed down. Smith thinks there are now four Dairy Cheers. Compton eventually wanted to sell her rights to his stores outright for a price. Smith said he and others signed contracts stating they could own and operate the Dairy Cheers “forever,” never having to pay fees and royalties. They were on their own.

Smith is a proud business owner. “Our unique hamburgers are so popular when people see me on the street they call me 'Smashburger.'” Smith gives much credit for the success of his restaurant to his predecessor Bob Borders. “Bob built the Pikeville restaurant to be the highest producing Dairy Cheer since the chain started," Smith exclaimed.

When the cut through had been made for the mountain road in 1973, Smith said it ran right by his restaurant, making it a great location. He said the mayor of Pikeville patronized his shop for years, sitting out in front, watching the view. 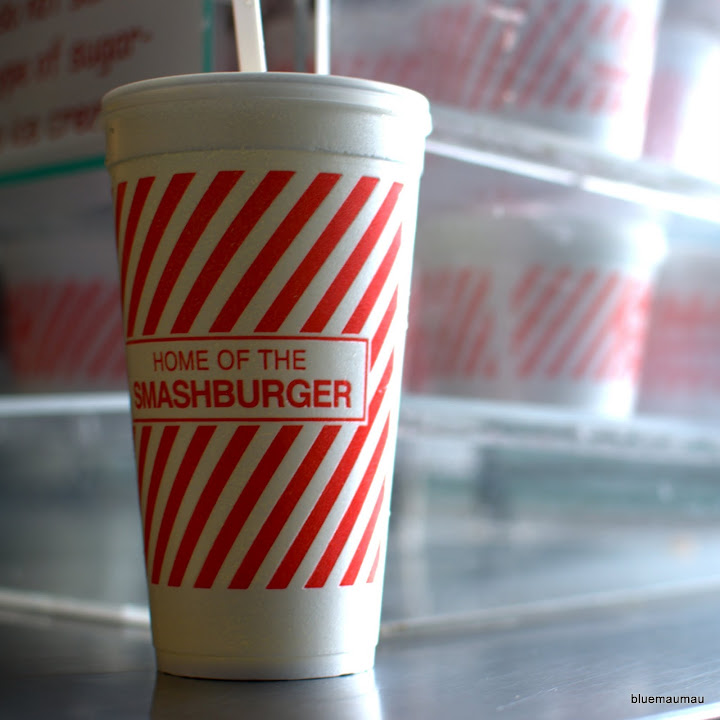 A Smashburger refreshment cup in Pikeville

Phyllis, who has worked at the Pikeville Dairy Cheer for the last 31 years, said the restaurant today is not much different than it was when she started working out of school.  “There wasn’t a drive-through window at that time.” She said the people were basically the same as back then. “The restaurant stays very busy,” she added.

So what’s it like being an entrepreneur in Pikeville, Kentucky? “If you own a business you have to work it. There’s not much time off," Smith said. His Dairy Cheer is open six days a week, but normally he doesn’t go in on Saturdays. “That doesn’t mean I’m really off. I never know when I will be needed,” he explained. “So I can’t rest until at night when the store closes.” He said he’s not the happiest person when employees do call him in. “If they need me on Saturday I’ll go. But Sunday is church day and we are closed,” he added. “It’s our day of rest.”

Smith said it is important to get away from a business. He leaves every day around 4:30 to go bike riding with his son, who is the restaurant manager. They often ride 40 miles across the beautiful Appalachian country of Eastern Kentucky.

The most traumatic time they’ve ever had with the business is when the hollow that Pikeville lies in was hit by a flood. Phyllis said, “The water was three feet high. Everything had to be taken out, tile and all.”

Then came the strangers. Smith said one of his customers warned him about a new Smashburger in the city of Lexington, some three hours away. Its bright bold red and white shops were coming into Kentucky with a splash. At that time Smith asked Compton what was going on. “She told me not to worry about it. She really played it down,” he said.

Smashburger, owned by Consumer Capital Partners in Denver, a spin-off of Quiznos sub sandwich franchise, began franchising in 2007. The private equity firm put up $15 million to get the new franchise enterprise going. Today Smashburger has grown to 150 locations, half company-owned and half franchised. Last year they showed annual revenues of $54 million.

In recent interviews with Bloomberg Enterprise and Forbes magazine, founder and chief concept officer Tom Ryan said, “Smashburger was born out of a very practical element of how they make their hamburgers.” He explained, “We start with a meatball on a buttered grill. We have these cool little smashing tools that we use to smash the meat down, allowing it to sear and cook in its own juices.”

As the executive team of the Denver Smashburger began planning out the menu, calling their meat patty the “smashburger,” it came to them, Ryan said. “Wallah, let’s call the place “Smashburger.” Four years later, here they are. “That’s the magic of Smashburger," Ryan said.

Kentuckian Chris Smith says now that the Colorado-centered Smashburger chain has come in, people say it’s not the same as his Smashburger. He proudly states, “They say ours is much better.”

This is a great story.  Congratulations to Janet and Don for tracking this down.  Look forward to the sequel.

I see SmashBurger is now

I see SmashBurger is now operating in Canada.

So the way I read this Dick, GB and their qtard cohorts stole this guy's concept, turned his slogan into the franchise name, and convinced someone to open a restaurant near the original home of the Smashburger? Yup, sounds like Dick.

Slide show for "Home of the Smashburger"

Kentucky has given the modern world Kentucky Fried Chicken. Maker's Mark. And now it is the home of the Smashburger.

I traveled there a few days ago. I enjoyed a great smashburger. Fantastic onion rings. And great conversation. Here is a slideshow of my photos.

Home of The Smashburger

Don - If the slogan is trademark protected, did Compton sell the rights to use "Smashburger" to Tom Ryan and Consumer Capital Partners?

Word on the streets here in the northern KY area was that a Smashburger was opening by NKU. I was thrilled because that is something I miss greatly from home. I eagerly awaited the green and white stripes of Dairy Cheer to welcome me in for a Smash-A-Roo.

My first clue that something was amiss was the red and white. Next was the menu.
That place may smash their burgers but they are no where near being Smashburger.

And I'm still craving a Smash-A-Roo...

QSucks, you're right ... A clear case of trademark infringement

Smashburger "outlawyered" the 'little old lady in Kentucky" with an argument about "trade dress."
Outrageous and blatant malfeasance, but speaking as a confidential source, you should have seen the look of joyful hubris on the face of the Smashburger executive who told me all about it.
Cheers to Janet and Don for their dedication and courage!

Smashburger tries to appear squeaky-clean, but the truth is, they've learned to be slightly more careful about hiding dirt than Quiznos was. More to come on Smashburger <grin> as soon as this confidential source recovers from the malicious retaliation she recently experienced, from the aforementioned Smashburger executive. Come to think of it, it's high time the truth comes out about Quiznos recent restructuring of three-quarters of a billion dollars worth of debt, and the questionable activities and individuals involved.

P.S. If anyone has a room for rent, or knows a good osteopathic surgeon, let me know. Truth hurts, and I'm hurting. God bless you all!