Arby's to Serve Venison and Elk Sandwiches on October 21 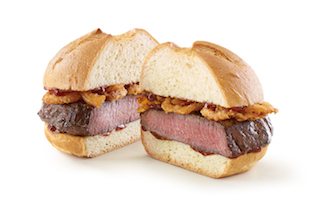 ​Arby’s will be offering venison sandwiches nationwide on Saturday, October 21. The Atlanta, Georgia-based chain served limited edition venison sandwiches in five states last year, which were snapped up by an enthusiastic public within hours at participating restaurants, the company states.

This time around every Arby’s restaurant in the U.S. will have venison sandwiches on the menu, available while supplies last, although they are expected to sell out quickly. The thick-cut venison steak and crispy onions will be topped with a Cabernet steak sauce infused with juniper berries, served in a toasted specialty roll.

“The positive response to our limited offering of venison last year was so widespread and passionate that we knew we had to find a way to offer it nationwide,” said Jim Taylor, Chief Marketing Officer of Arby’s Restaurant Group, Inc. “On October 21, we want hunters and meat enthusiasts across the country to visit their local Arby’s and enjoy this amazing sandwich.”

Elk steak sandwiches will also be offered on October 21, but on a much more limited basis than the venison sandwiches. Only one restaurant in each of the elk hunting states of Colorado, Wyoming and Montana will have them. The elk steak will be in a toasted specialty roll, topped with blackberry port steak sauce and crispy onions.

They will be offered to Arby's guests at the following locations: