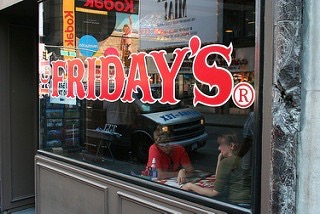 Expanding on its presence in the Amazon Marketplace, Dallas-based TGI Fridays has designed and developed an Alexa skill (i.e. Alexa function) that allows users, using just their voice, to quickly make reservations, place an order to go, and pay their bill. The company announced yesterday that the new skill is available at a limited number of Fridays restaurants and will be available across America by the New Year.

Alexa customers can choose to use the payment information already in their Amazon account when they want to place their order. With yesterday’s launch of the new Fridays Alexa skill, users may place and pay for their Fridays order using Amazon Pay on their Alexa-enabled devices, which are primarily the Echo, Echo Dot, Tap, Echo Show, Fire TV, and Fire Tablet.

Online ordering, launched last year, has worked out well, with take-out sales growing by 30 percent since then, according to the company.

“The launch of online ordering and our commitment to digital innovation has resulted in significant growth in our To-Go business, with more than 70 percent of those orders coming from new Fridays customers.” said Stephanie Perdue, Chief Marketing Officer at TGI Fridays. “As we continue to innovate, we’re focused on creating digital programs with industry leaders like Amazon that make the Fridays experience more convenient for guests to recreate at home.”

By ordering through Alexa, guests can access the full menu and exclusive online offers, like Fridays new Big Ribs for only $12.99. Here’s how it works:

TGI Fridays has built serendipitous amusement into the skill. Discover it for yourself by asking, “Do you like ribs?” or “What day is it?” and seeing how Alexa responds.

“From the launch of our Fridays mobile app, to our order ahead feature on the Amazon app and our social media chatbots powered by Conversable, Fridays has committed to delivering a great guest experience both inside and outside of the restaurant,” said Sherif Mityas, Chief Information Officer at TGI Fridays. “Working with Amazon has allowed us to continue elevating our digital offerings, making enjoying Fridays even more expandable for our guests.”

In addition to the new capabilities through Amazon Alexa, Fridays offers several ways for guests to place an online order, including an easy re-order option on the Amazon app, a “chatbot” on Facebook and Twitter messenger, and the “order now” button on Facebook.

Fridays was founded in 1965, when it opened its first location in New York City. The chain now has over 900 restaurants in 60 countries. Over half of its 551 U.S. restaurants are franchised.