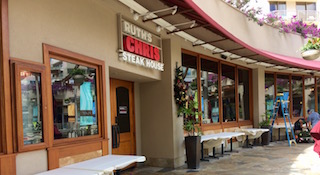 Setting up for Christmas 2017 at Ruth's Chris Waikiki

The acquisition includes a new location opened in early November on the island of Kauai, as well as area development rights for the balance of the state. The company has over 150 company-owned and franchisee-owned restaurants worldwide. The acquisition was funded with debt through the company’s senior credit facility.

Hawaii's biggest industry is tourism, making it a good setting for restaurant traffic. Last year 9 million people visited Hawaii, a state with a population of 1.4 million.

Mike O’Donnell, chairman and chief executive officer of Ruth’s Hospitality Group, stated, “We believe the acquisition of our Hawaiian franchise locations presents a significant opportunity for us. Since 1994, Randy Schoch [Desert Island Restaurants founder and CEO] and the local teams have built an award-winning group of restaurants leveraging our founder Ruth Fertel’s successful recipe: sizzling prime steaks and legendary hospitality, together with the aloha spirit of Hawaii. I’m pleased to officially welcome these impressive restaurants and their outstanding teams into the Ruth’s Hospitality Group family. We are proud of their achievements and we are committed to supporting their success. Randy will maintain a leadership relationship with RHGI and together we will work to ensure a seamless transition for team members and guests.”