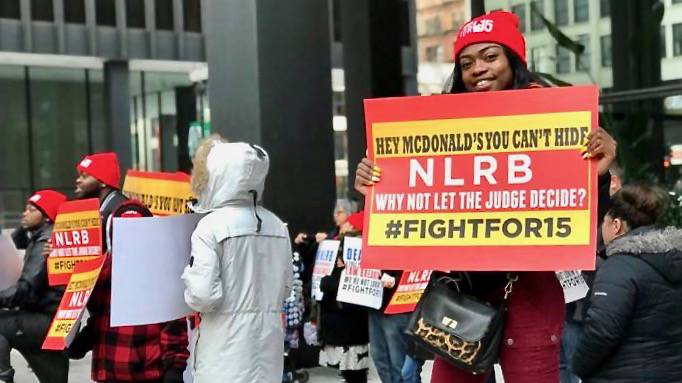 McDonald's Corporation [NYSE:MCD] yesterday raced to submit its settlement agreement to the National Labor Relations Board prior to the deadline set by the NLRB. McDonald's is fighting against claims of unfair labor practices as a "joint employer" from its franchisees' workers.

But when the corporation asked the judge to approve it, she said the settlement would not be approved until she heard arguments on both sides at a hearing.

McDonald's settlement would pay a range of roughly $20 to $50,000 to several dozen workers who alleged that the company's franchises had violated their labor rights. And, McDonald's and its franchisees would not have to admit any liability.

Micah Wissinger, attorney for the Service Employees International Union, SEIU, who helped bring the charges against McDonald's, called the franchisor's settlement a sham.

After McDonald's submitted its proposal to the NLRB, the franchisor rushed to get its statement out, saying, "While the settlement is not yet final, we believe this is a major first step in ending this wasteful multi-year litigation."

The issue at hand is that companies such as McDonald's could be considered a joint employer with its franchisees if it exerted indirect control over the employees of the franchisees, or if it had the right to exercise control over workers that it nonetheless did not exercise. Reuters reported on Monday that business groups had voiced that "a ruling against McDonald's could upend the franchising model by making franchisors more vulnerable to lawsuits and requiring them to bargain with unions representing franchise workers."

Union-based Fight for $15 had recently launched a number of protests against the possibility of a settlement between the NLRB and McDonald's Corp. The demonstrations were in front of NLRB offices in Los Angeles, San Francisco and Chicago, just days before the NLRB vacated its decision in the groundbreaking joint-employer Hy-Brand case, due to a significant conflict of interest of one of the Labor Board's members.

Common Dreams, a non-profit independent news center representing Fight for $15, said at that time that by seeking a settlement with McDonald's after 150 days of trial and hundreds of hours of testimony, and with only two days left of trial, NLRB General Counsel Peter Robb "is bowing to pressure from McDonald's and could be giving the company a get-out-of-jail free card for threatening, intimidating, harassing and even firing workers who stood up and demanded $15 an hour and union rights."

When McDonald's made its statement Monday saying it submitted a proposal for settlement, the New York Times reported that "the Trump appointee charged with enforcing federal labor rights was moving to head off a court ruling in a case against McDonald's that could redefine the accountability of companies for their franchisees' employment practices." The Times explained that the case before the NLRB was brought during the Obama administration, when the board was under Democratic control. Now, under Trump, "Republican members have regained a majority, steering the board away from a pro-labor orientation," the article stated.

Last month, the International Franchise Association, which vows to represent franchisors and franchisees, called on the Senate to take action after the NLRB ruled in Hy-Brand, reversing the joint employer issue in the highly controversial Browning-Ferris case. Matt Haller, senior vice president of government relations, said, at that time, the decision raises the level of urgency for the Senate to act on the bipartisan joint-employer bill passed in November 2017. "We are hopeful Senators can step into the breach created by today's decision and exercise their right to codify a definition of joint employer for small business owners everywhere and end the constant ping-ponging back and forth of this issue," Haller declared.

Democratic senators did step up. Elizabeth Warren of Massachusetts and Cory Booker of New Jersey, who lately have been involved in hotly debated issues in the franchising arena, joint-employer and anti-poaching of workers at franchise locations, wrote in a letter to NLRB "that the board's reversal [of Browning-Ferris] "eliminates whatever support may have existed for your efforts to settle the McDonald's case so near to the trial's close." The Times said they urged Mr. Robb to "swiftly resume and finish the trial."

Attorneys for the SEIU, representing the workers, had argued that even if General Counsel Peter Robb preferred to seek a settlement, it make no sense to stop the McDonald's trial, which was only days away from concluding, to do so, New York Times reported. They argued that a stay in the case would only give McDonald's an advantage by preventing union counsel from cross-examining a key witness, that it fostered "a game of hide-the-ball."

The Times also reported that an adverse ruling for McDonald's could have "enormous implications for the franchise business model, affecting millions of workers in the fast-food industry and beyond." It said workers at disparate franchise locations could also "seek union representation to deal directly with parent companies, rather than be left to work out disputes with franchisees."

The NLRB judge gave its surprising decision in January, halting the trial for 60 days to allowing the parties to discuss settlement proposals, and the general counsel pressed on, brokering settlement talks while lawyers from the NLRB regional offices "abruptly reached out to several former McDonald's workers involved in the case. New York Times reported, "In one instance, a labor board lawyer called a worker and asked if she 'was ok with $50k' for back pay as part of the settlement, according to an email between the board and Mr. Wissinger, one of the union lawyers. The offer was conditional on the worker's waiving her right to be reinstated in her old job."

Attorney Micah Wissinger said the calls created the impression "that workers needed to accept the offers before they consulted with him or his colleagues or anyone else, and that at least two did," the report said. He said by the time they found out about it, it was already a done deal, adding, "They were completely cutting us out of the process."

The Times concluded, saying that a former deputy general counsel for NRLB in 2017, said settlement talks with lawyers who backed the workers were a break with custom. "That's unusual. The charging party is the one that the regions typically go to. And the charging party in this instance is the SEIU."