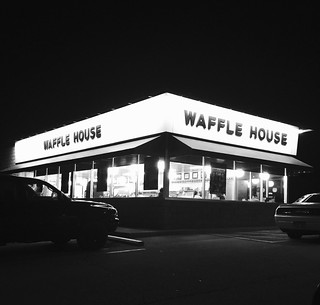 As a criminal trial began last Monday in Atlanta, former Waffle House CEO Joe Rogers, Jr. wept as jurors observed a sex tape of him and his prior longtime housekeeper as they were engaged in a sexual escapade at his home where he resided with his family. The ex-employee and her attorneys are now accused of trying to extort millions of dollars from Rogers in a blackmail conspiracy scheme.

The video, showing the naked Rogers after showering, asking his housekeeper for an adjustment on his back that leads to their sex act, is the key piece of evidence surrounding all lawsuits, countersuits, and appeals in the six-year span of litigation, which escaladed all the way to the Georgia Supreme Court.

The former housekeeper, Mye Brindle, and attorneys David Cohen and John Butters, are on trial in Superior Court of Fulton County in Georgia on charges that they violated the state's eavesdropping law by secretly recording the sex tape, a felony that carries a maximum prison sentence of five years. Fulton County Judge Henry Newkirk initially threw out the indictment, but the Supreme Court of Georgia reinstated the eavesdropping charges last November.

Rogers' wife, Fran Rogers, also testified, and in tears described finding Brindle's 2012 resignation note in to her husband in his sock drawer that stated she "could no longer bear the pain, humiliation and damage to my well-being from what you have demanded and required of me in this position," according to a report by the Atlanta Journal Tribune. In supporting her husband, she also has denied the allegations made by their former housekeeper that over a nine-year period the numerous sexual encounters were not consensual on her part.

After making the sex tape and then quitting her job, Brindle sued Rogers in 2012 in Cobb County Court alleging sexual harassment and assault. Rogers adamantly denied the charges saying the sexual encounters were consensual by both of them, and the video was made by Brindle with the assistance of the two attorneys she had retained. He alleges Cohen and Butters advised her on how to make the video, and even had a private investigator provide Brindle with an "illegal spy camera," in order to do the filming without his knowledge.

Rogers countersued to prevent the video from being released to the public. The Cobb County judge, who later recused himself from the case, ruled to disqualify Brindle's attorneys for being involved in the creation of the sex video.

In Georgia Supreme Court in June of 2016, Brindle and attorneys Butters and Cohen were indicted on charges that they tried to force Rogers to pay millions of dollars to stop them from releasing the video recording. Last year, Judge Henry Newkirk threw the lawsuit out, but it was overturned by the Georgia Supreme Court last November, reinstating the indictment against Brindle.

As background, court documents state that after Mye Brindle first terminated her services at Rogers' residence in January 2009, the alleged consensual sexual activity between Brindle and her employer ended. Rogers again contacted the housekeeper, this time offering her a "house manager" position. After an interview, she accepted the job under her mother's employee leasing business, The Balancing Act, and was again employed at the Rogers home. The legal complaint states that in October 2009, the "consensual sexual activity" between Rogers and Brindle resumed.

In late 2011 and early 2012, Brindle and her mother began experiencing significant financial distress, and Brindle's work performance deteriorated. When Rogers addressed the issues surrounding Brindle's performance, she became upset and left the notice of resignation in Rogers' dresser drawer on June 29, 2012.

After Brindle formally engaged the legal services of attorneys Cohen and Butters on June 6, 2012 to represent her in a lawsuit to be filed against Rogers, she allegedly provided them with tapes and video recordings, and towels used during sexual acts between her and Rogers, taken from her employer's home. However, the lack of evidence for such a case lead the lawyers to device a scheme where she could instead extort millions from her employer.

Cohen and Butters sent Rogers an extortion letter on July 16, 2012, on behalf of their client Mye Brindle, which is now an exhibit in Rogers' lawsuit against David Cohen, John Butters, and their law firms, and others involved, listed as John Does. The letter alleges that his sexual harassment and abuse was a condition of his housekeeper's employment.

In an effort to resolve the matter, Rogers and his attorneys participated in the mediation meeting recommended by Brindle's attorneys. Court records show that when Brindle's lawyers demanded $12 million from Rogers, he and his counsel ended the mediation and filed a lawsuit in Superior Court of Cobb County, seeking to enjoin Brindle from distributing and using any video recordings she had secretly made without Rogers' consent. He then filed a motion to seal the record in that action. On September 19, 2012, Brindle's attorneys filed a complaint in the State Court of Fulton County, disclosing in public her sexual relationship with Rogers.

After much legal wrangling over sealed documents, and conducting evidentiary hearings, the court granted Rogers' motion to seal. On October 11, 2012, Brindle voluntarily dismissed without prejudice the legal action she had filed through her attorneys. Five days later the court entered a written order confirming Rogers "had a right to privacy in his bedroom and bathroom and finding that the video recording of Rogers violation criminal statutes."

Daily Report, a Law.com legal bulletin, reported Thursday that a defense lawyer in the ongoing trial "attempted to turn the tables and put company chairman Joe Rogers Jr. on trial for allegedly assaulting and sexually harassing longtime housekeeper Mye Brindle." He attempted to paint the Waffle House executive "as an alleged serial harasser willing to lie under oath."

The report states that the attorney, Brian Steel, representing David Cohen at the trial, put Rogers' character on trial, citing a vacated court opinion accusing Rogers of perjury, suborning perjury and bribery in a decades-old sexual harassment case against Texas Waffle House executives. It accused Rogers of "groping a former housekeeper and nanny in 1994 as she gave him a massage." For three hours, Steel attempted to show that Rogers in 1997 was also called out by the judge in a Texas case over insisting that his sexual interludes with a female employee were "welcomed."

Steel also stated at trial that Rogers described Brindle and her attorneys' actions as "a setup and a shakedown," as he did in the Texas case. Rogers replied, "I never told anyone that." Waffle House settled the Texas case for a reported $8 million. Steel claimed Rogers "paid money to hush it up." Again, Rogers denied it saying, "Obviously, we didn't hush up anything. Things got messed up. Sometimes you have to pay that stupid tax and move on, because we had a business to run."

The Daily Report also said Jimmy Berry, who represents attorney Butters, questioned Rogers about "an affair he had with another Waffle House executive that spanned nearly a decade while Roger was married to two other women." Berry indicated that the affair violated Waffle House's harassment policies.

Watching sex video tapes in court proceedings can be meaningful, as the jury in Atlanta is currently doing this week. In June of 2013, Cobb County Superior Judge Robert Leonard issued his decision in Brindle's lawsuit stating that "the video recording makes it clear that Brindle was a willing participant in the sexual encounter and is not the victim of sexual battery." He also ruled that "certain conversations between Brindle and her attorneys were not protected by attorney-client privilege because of evidence they were in furtherance of a crime, specifically filming of a sex act with Rogers."

At the time Rogers was desperately trying to keep the court documents and videos out of the public eye, to save his reputation and embarrassment to his family and company. He made a statement saying, "I am a victim of my own stupidity, but I am not going to be a victim of a crime—extortion."