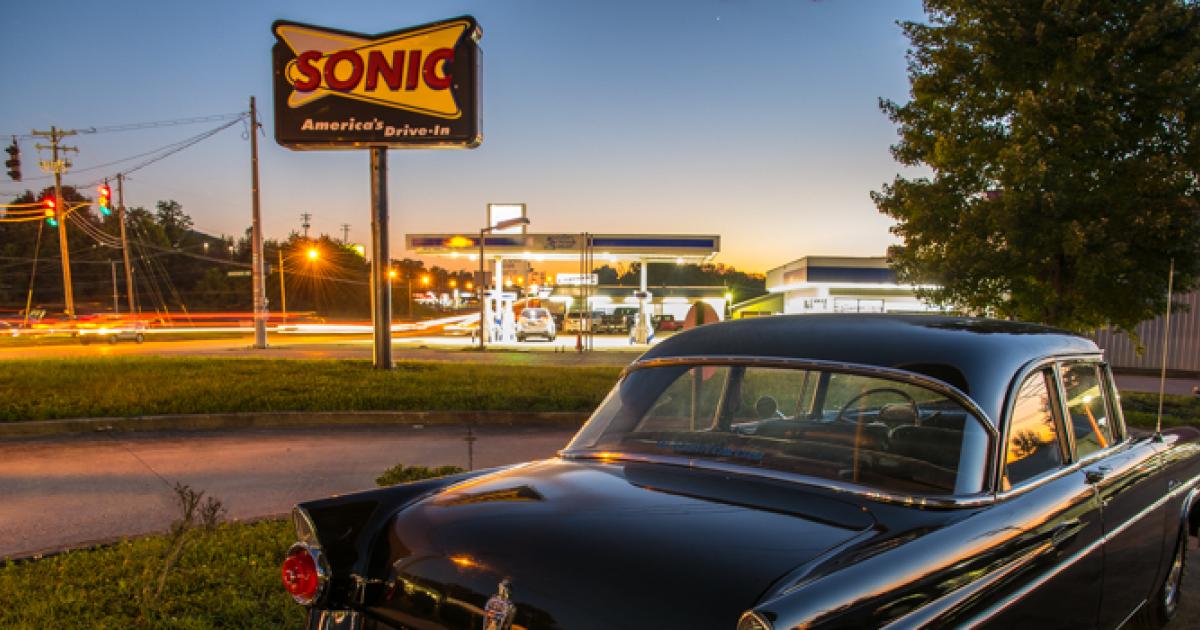 Inspire Brands, the restaurant arm of private equity firm Roark Capital Group, announced on Tuesday that it will acquire Sonic Corp [NASDAQ: SONC] for approximately $2.3 billion, which includes the assumption of Sonic’s debt by Inspire.

Sonic’s board of directors unanimously approved the deal. Following the completion of the transaction, Sonic will be taken from a publicly held company to one of a portfolio of franchising firms owned by a privately held subsidiary of Inspire Brands.

Inspire is a franchisor of a diverse collection of restaurant brands of nearly 4,700 locations worldwide, which are affiliated with its Arby’s, Buffalo Wild Wings and Rusty Taco trademarks. The multibranded franchisor was launched in February when Roark Capital’s Arby’s Restaurant Group acquired Buffalo Wild Wings.

Sonic restaurants have had a tough time against burger chain competitors when measured by same-restaurant sales (see chart below). In the hyper-competitive world of hamburger chains, the brand has lost ground until its latest quarter that ended August 31. (It is too new to appear on the chart below to compare with its competition, which have yet to report.) Sonic restaurants had quarterly growth of 2.6 percent in same-restaurant sales compared to the same period a year earlier. Sonic’s own drive-in locations increased only slightly less–by 2.5 percent. It was a good quarter.

Inspire assures that Sonic will continue as an independent brand 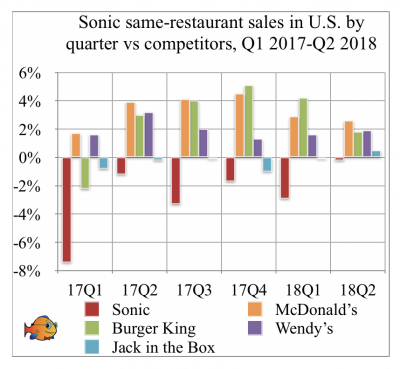 Inspire Brands’ chief executive officer spoke confidently about Sonic’s future to employees and franchise owners. Employees likely are wondering what will happen to their jobs. On the other hand, franchisees would naturally be considering how such a deal might impact their Sonic restaurant investments, the resale values of their franchises, and whether various brands in Inspire’s portfolio will be merged to save franchising and franchise support costs for the franchisor. Inspire Brands assures them that Sonic Drive-Ins will be operated as an independent brand. “We have tremendous respect for Sonic’s exceptional team of employees and franchise owners, who have built one of the industry’s most distinctive restaurant brands,” said Paul Brown, CEO of Inspire Brands, about the $2.3 billion deal.

The National Association of Sonic Drive-In Franchisees has been publicly silent of late. That is surprising given that independent franchisee associations identify, vote on, and resolve issues that are important for franchisees. The raison d’être for such associations is to create better deals for franchisees, a better environment and to provide a better say in the strategic direction of the franchise network. Yet, in this time of great change, the association's website is under construction.

“The National Association of Sonic Drive-In Franchisees has been dormant for some time,” states Richard Hess, its executive director. Hess now volunteers his services so that a structure remains should the need arise for the association to quickly reorganize and respond.

The association and its franchisee members were caught blindsided by Inspire Brands’ acquisition of Sonic. “I was unaware of these negotiations until decisions had been made and announced,” says Hess. It was announced on Tuesday, four days ago.

Franchisee consultant says change is in need of an association

Restaurant-unit economist John Gordon, principal of Pacific Management Consulting Group, thinks that if ever there was a situation in which a franchisee association needs to be reconstituted and vibrant, it is now. “The National Association of Sonic Drive-in Franchisees must reconstitute," says Gordon. "Inspire Brands and the new management in Sonic will need the association’s wisdom, influence and nudge. There is no reason for the franchisee association to be invisible, especially at this time.”

The chief executive of Sonic publicly assures that its new parent company will be good to its franchisees. “As one of the largest owner-operators of company-owned and franchised restaurant brands, Inspire appreciates the unique culture of collaboration between Sonic and our franchisees,” says Sonic Corp. chief executive officer Cliff Hudson. Hudson has been Sonic’s CEO since 1995, over 23 years. “Sonic franchisees are engaged in planning regarding technology, new products and marketing programs, and the team at Inspire recognizes the central role our franchisees have played, and will continue to play, in Sonic’s success,” added Hudson. “We look forward to working closely with Inspire as we continue to provide made-to-order American classics, distinctive flavors and the most personalized guest experience in our industry.”

The association’s executive director has heard good things about Roark and Inspire Brands from members. “Everything I’ve heard from franchisees thus far has been positive and optimistic,” says Hess. “They seem to think there will not be significant changes and the changes that do occur will be good. They also think going back private was the way to go.”

Analyst Gordon understands why franchisees may be optimistic about Roark buying their franchisor. “The franchisees probably feel that there is understandably less short-term pressure and angst with a private company like Roark Capital,” says Gordon. “In contrast, Sonic had to release a quarterly financial report,” says the restaurant economist on how publicly held firms submit public quarterly reports and an accounting to the Security and Exchange Commission and shareholders. That can create a short-term focus to perform for a company.

Gordon, who consults with franchise owners around the country, thinks there will be a changing of the guard at Sonic. Old relationships between franchisees and management will be significantly altered as the franchisor changes. “Cliff Hudson will exit,” anticipates Gordon. “Other corporate officers will stay but some will exit.”

“Look at Inspire Brands’ acquisition of Buffalo Wild Wings,” points out Gordon. “Although Inspire did leave some services in the old Buffalo Wild Wings headquarters at Minneapolis, they have shifted services and leadership to Atlanta. For Sonic, I expect some services will be left in their old headquarters in Oklahoma, but there will be a shift to Atlanta, where Inspire is based.

Some franchisees may be impressed with the fresh thinking of Inspire Brand’s Paul Brown. However, Gordon warns, “Inspire Brands seems to be shopping for 4 or 5 more major brands.” That leaves less attention to Sonic.

The franchisee association needs to help guide all of this dynamic transition in a collaborative fashion,” says Gordon. “Franchisees need to regather their association.”

Photo above of a small town's Sonic Drive-in by Don Sniegowski. Quarterly reports between brands that are featured in the chart can vary by plus or minus a month from the fiscal quarter. The timing of the brands have been put into the same fiscal year calendar quarter in order to harmonize them.