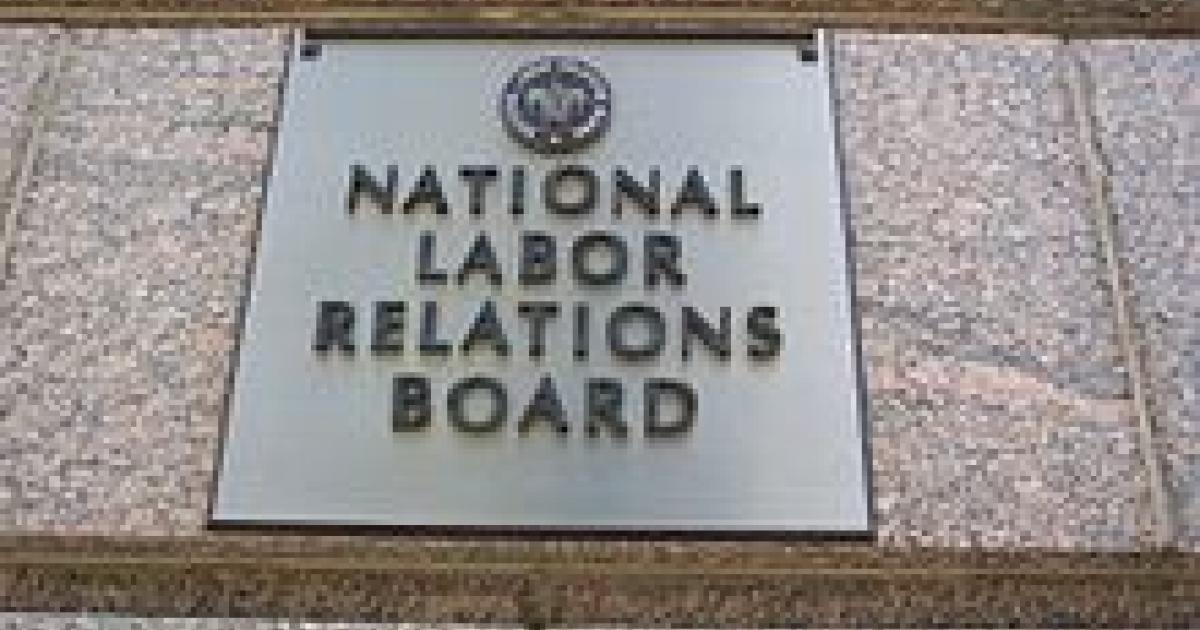 After receiving 4,595 comments regarding its Notice of Proposed Rulemaking, the National Labor Relations Board has now released a draft of its proposed regulation establishing its "joint employer" standard, again asking for more comments prior to its completion.

The board believes that this rulemaking will foster predictability and consistency regarding determinations of joint-employer status in a variety of business relationships, thereby promoting labor-management stability, one of the principal purposes of the Act. Under the proposed regulation, an employer may be considered a joint employer of a separate employer's employees only if the two employers share or codetermine the employees' essential terms and conditions of employment, such as hiring, firing, discipline, supervision, and direction. More specifically, to be deemed a joint employer under the proposed regulation, an employer must possess and actually exercise substantial direct and immediate control over the essential terms and conditions of employment of another employer's employees in a manner that is not limited and routine.

The board said the comment period from the public regarding the NLRB regulation will continue through November 13, 2018. Comments submitted during the initial comment period must be received by the NLRB prior to November 20, 2018. The Board will post all comments it received on http://www.regulations.gov without making any changes, including any personal information provided.

The NLRB declares that whether one business is the joint employer of another business’s employer’s work force is one of the most important issues in labor law today. “There are myriad relationships between employers and their business partners, and the degree to which particular business relationships impact employees' essential terms and conditions of employment varies widely,” the regulation announcement states. It explains that its “joint employer” definition can have significant consequences for businesses, unions, and employees alike.

Its definition states, “When the Board finds a joint-employer relationship, it may compel the joint employer to bargain in good faith with a Board-certified or voluntarily recognized bargaining representative of the jointly-employed workers. Additionally, each joint employer may be found jointly and severally liable for unfair labor practices committed by the other. And a finding of joint-employer status may determine whether picketing directed at a particular business is primary and lawful, or secondary and unlawful.”

The International Franchise Association has been a staunch supporter of the NLRB revising its standard to protect franchisors and franchisees from being labeled as joint employers with their franchisees. IFA chairman and president Robert Cresanti again expressed on September 13 that franchise owners “have been confused about the vague and uncertain legal minefield created by the NLRB joint employer standard since it was expanded in 2015.”

The IFA chief executive said, “Rulemaking is an important step to address the concerns of local business owners by providing the clear lines in the determination of joint-employer status. We look forward to participating in the public notice and comment process in the coming days.” IFA explained that under the proposed rule, an employer may be found to be a joint-employer of another employer’s employees “only if it possesses and exercises substantial, direct and immediate control.”  The 58-year-old Washington D.C.-based association said it “will continue to engage its members to support this positive rulemaking process.”

And it did. It was on September 17th when NLRB Chairman John F. Ring announced he was publishing a Notice of Proposed Rulemaking with a 60-day comment period in order to promulgate a final rule that will clarify the joint-employer standard “in a way that promotes meaningful collective bargaining and advances the purpose of the Act.”

Reiterating IFA’s comment the previous week, NLRB Chairman Ring then announced the proposed joint-employer rule will state, “An employer may be found to be a joint-employer of another employer’s employees only if it possesses and exercises substantial, direct and immediate control over the essential terms and conditions of employment and has done so in a manner that is not limited and routine.”

The summary of the NLRB proposed regulation explains that the Act does not contain the term “joint employer,” much less define it. Instead, the Board and reviewing courts have addressed situations where the working conditions of a group of employees are affected by two separate companies engaged in a business relationship.

When distinguishing between an “employee” under the Act and an “independent contractor” excluded from the Act’s protection, the Supreme Court has explained that the Board is bound by common-law principles, focusing on the control exercised by one employer over a person performing work for it. The summary states that when Congress has used the term employee without defining it, the Board has concluded that “Congress intended to describe the conventional master-servant relationship as understood by common law agency doctrine.” Similarly, it states that it is clear that the Board's joint-employer standard, which necessarily implicates the same focus on employer control, must be consistent with the common law agency doctrine.

Under the act, there has been longstanding consensus regarding the general formulation of the Board’s joint-employer standard: “Two employers are a joint employer if they share or codetermine those matters governing the employees' essential terms and conditions of employment.” It cites several cases and one, NLRB v. Browning-Ferris Industries, as endorsing the court cases, where the U.S. Court of Appeals for the Third Circuit carefully explained the differences between the Board’s joint-employer and single-employer doctrines, which had sometimes been confused, the NLRB summary states.

It continues explaining that “at certain points in its history, the NLRB has discussed the relevance of an employer’s direct control over the essential employment conditions of another company’s employees, as compared with its indirect control or influence, in determining whether joint-employer status has been established.” It gives an example, but saying the NLRB was not called in to decide or give its opinion in the case.

More recently, the Board made it clear that “the essential element” in a joint-employer analysis is whether a putative joint employer’s control over employment matters is direct and immediate,” again citing cases. But in years past, evidence of indirect control was typically insufficient to establish joint-employer status where such supervision was “limited and routine.”

The NLRB summary goes on to say that the law governing joint-employer relationships changed significantly in August 2015, referring to Browning-Ferris, when the Board relaxed the requirements for proving a joint-employer relationship, explaining that it would no longer require proof that a putative joint employer has exercised any “direct and immediate control over the essential working conditions of another company’s workers. The Board’s majority in Browning-Ferris explained that, under its new standard, a company could be deemed a joint employer even if its “control” over the essential working conditions of another business’s employees was indirect, limited and routine, or contractually reserved but never exercised.

The summary gives details as to how the NLRB members wrestled with coming to a decision in Browning-Ferris. Then in December 20117, after a change in the Board’s composition and while Browning-Ferris was pending on appeal in the D.C. Circuit, a new Board majority overruled Browning-Ferris and restored the preexisting standard that required proof that a joint employer actually exercised direct and immediate control in a manner that was neither limited nor routine.

In Hy-Brand Industrial Contractors, Ltd., the charging parties filed a motion for reconsideration, and the Board granted that motion and vacated its earlier decision for reasons unrelated to the substance of the joint-employer issue. That effectively returned the law to the relaxed joint-employer standard adopted in Browning-Ferris. Subsequently, the Board in Hy-Brand denied the motion for reconsideration and issued a decision finding it unnecessary to address the joint-employer issue in that case because the two respondents constituted a single employer under Board precedent and were therefore jointly and severally liable for each other’s unfair labor practices.

Again, the 48-page summary states that a petition for review of the board’s Browning-Ferris decision remains pending in the court of appeals.

Validity and desirability of rulemaking

According to the Act, the National Labor Relations Board says it has the authority to propose the new rule and invite comments on the issue. Given the recent oscillation on the joint-employer standard, a wide variety of business relationships may be affected, including franchisor-franchisee. The rulemaking procedure will enable the Board to clarify what constitutes “direct and immediate control” by hypothetical scenarios. The NLRB summary states that in this way, rulemaking will provide unions and employers greater certainty beforehand as to when they may proceed to reach decisions without fear of later evaluations labeling their conduct an unfair labor practice.”

“We have stated our preliminary view that the Act's policy of promoting collective bargaining to avoid labor strife and its impact on commerce is not best effectuated by inserting into a collective-bargaining relationship a third party that does not actively participate in decisions establishing unit employees' wages, benefits, and other essential terms and conditions of employment. We look forward to receiving and reviewing the public's comments and, afterward, considering these issues afresh with the good-faith participation of all members of the Board.”

The NLRB also gives the view of dissenting member Lauren McFerran in Hy-Brand and Browning-Ferris, and the “majority’s justification for revisiting Browning-Ferris is inadequate.”

The Board identified five types of small businesses as those most likely to be impacted by the rule:

In explaining the topic of franchising the board states the following:

“Franchising is a method of distributing products or services, in which a franchisor lends its trademark or trade name and a business system to a franchisee, which pays a royalty and often an initial fee for the right to conduct business under the franchisor's name and system. (60) Franchisors generally exercise some operational control over their franchisees, which renders the relationship subject to application of the Board's joint-employer standard. The Board does not have the means to identify precisely how many franchisees operate within the U.S., or how many are small businesses as defined by the SBA. A 2012 survey of business owners by the Census Bureau revealed that at least 507,834 firms operated a portion of their business as a franchise. But, only 197,204 of these firms had paid employees. (61) In our view, only franchisees with paid employees are potentially impacted by the joint-employer standard. Of the franchisees with employees, 126,858 (64.3%)) had sales receipts totaling less than $1 million. Based on this available data and the SBA's definitions of small businesses, which generally define small businesses as having receipts well over $1 million, we assume that almost two-thirds of franchisees would be defined as small businesses.”