Franchise establishments in the United States increased their hiring by only 4,000 jobs from the end of February to March, according to ADP Research Institute. That is the lowest hiring gain among franchise employers since September 2018 when franchises collectively lost 5,700 positions.

There were three months of job losses last year among franchised employers (see chart), which is highly unusual.

For March, lodging and business service franchises were the hardest hit, dipping into the red by losing 200 and 300 positions respectively. Restaurant hiring, the largest sector in the industry, was up a meager 3,800 positions, Auto dealers were up a modest 2,400.

For the broader employment market, the change in non-farm private sector hiring overall in the U.S. gained a weak 129,000 jobs in March. Hiring in the construction, manufacturing and financial service sectors all lost positions. 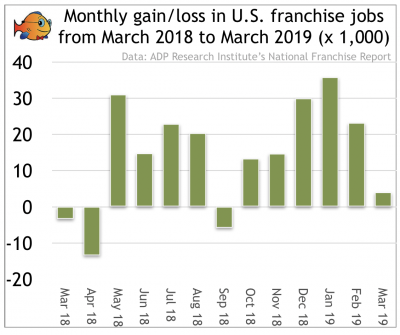 March’s low job numbers could be a foreshadowing of employment trouble ahead for the economy.

Small businesses and franchise establishments seem particularly hard hit in March. Small businesses, which are categorized as businesses that have 1 to 49 employees, were up by only 6,000 jobs for the month. That is down considerably from January's robust gain of 63,000 jobs.

Unemployment rates have been low for some time, hovering at or slightly below 4 percent for over a year, according to the U.S. Department of Labor’s Bureau of Labor Statistics. Such a low rate indicates a tough environment for small businesses and franchises to be able to find workers since large companies tend to offer better worker benefits. Still, hiring in a low unemployment hyper-competitive environment has not prevented franchise establishments from showing big hiring gains. Franchises hired a bumper 35,800 positions just two months ago in January, or 40,900 in June of 2016 when the unemployment rate was also robust at only 0.9 percent higher than now.

“The job market is weakening, with employment gains slowing significantly across most industries and company sizes,” stated Moody’s Analytics chief economist Mark Zandi. “Businesses are hiring cautiously as the economy is struggling with fading fiscal stimulus, the trade uncertainty, and the lagged impact of Fed tightening. If employment growth weakens much further, unemployment will begin to rise.”

ADP’s national franchise report for April will be released on Wednesday, May 1.