Fast casual restaurant chains have grown both in unit count and consumer visits says a market researcher. The count of fast casual chain restaurants rose by 1 percent to 25,312 units as of September 30, 2018 compared to the same period the year before, according to The NPD Group. 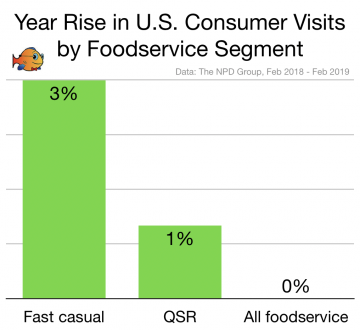 Consumer visits of fast-casual restaurants were also up — by 3 percent from February 2018 to February of this year. Compare that to a 1 percent increase of traffic with quick service restaurants and no change for U.S. foodservice traffic as a whole, according to NPD’s market research.

The researcher reports that the top five U.S. metro areas with the most number of fast-casual chain units are: