Franchises Pull Back Hiring in September

Franchised establishments in the United States pulled back hiring, rising only modestly in their hires in September over August. Franchises gained 5,800 jobs in September, according to the ADP National Franchise Report. 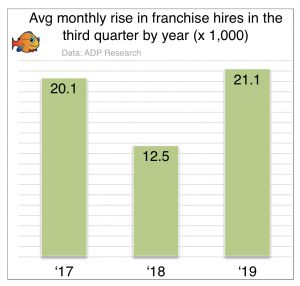 Nonfarm private-sector employment increased a modest 135,000 jobs. Down by 3,000, mining and natural resources was the only industry that dropped jobs.

“The job market has shown signs of a slowdown,” said Ahu Yildirmaz, vice president and co-head of the ADP Research Institute. “The average monthly job growth for the past three months is 145,000, down from 214,000 for the same time period last year.”

The softening of the job market may be the case for nonfarm private-sector employment, but not for franchises. Although September saw only a meager gain in franchise jobs, the monthly average hires for July, August, and September are up. Franchise hires this year in the third quarter compared to the same period from last year and the year before is at its highest (see chart).

Small businesses, categorized as businesses between 1 to 49 employees, were up a modest 30,000 jobs in September.